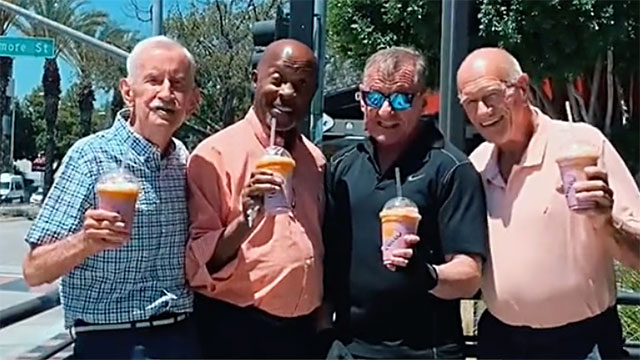 The Old Gays, a quartet of senior gay men who have developed a devoted following for their candid and often hilarious observations on queer life, have shared a video for Pride that is charming the TikTok world.

Each of the men take turns holding up photos of themselves as young men, and contrast how they felt about being gay when they were young versus today.

Bill: “When I was growing up, my father was always trying to out me. Well, here I am – free, proud and gay as can be.”

Robert: “My father suddenly died while I was in college. I wasn’t sure about my future. But here I am today – 78, proud and still chugging along.”

Jessay: “Growing up, I was terrified to come out to my mom. But I finally worked up the courage to do it, and she encouraged me to be myself. Well, here I am.”

Michael: “This is me at 20, one year before attending my first pride. I was uncertain of who I was. Now 55 prides later, I know exactly who I am.”

The four end the clip with a stop at Shake Shack to enjoy Pride Shakes at the fast food vendor. Proceeds from the shake go to support The Trevor Project.