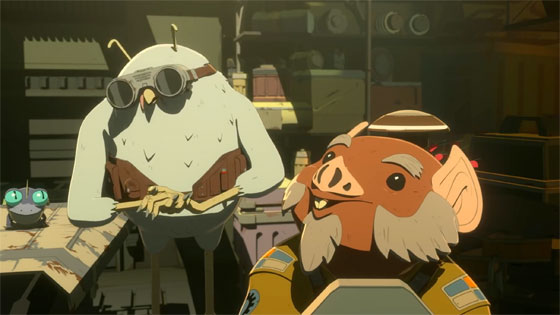 During an appearance on the podcast Coffee with Kenobi, producers of the children’s animated series Star Wars Resistance revealed that two characters, Orka and Flix (voiced bu Jim Rash and Bobby Moynihan respectively) are a gay couple.

Producers Justin Ridge, Brandon Auman, and Athena Portillo sat down with the popular podcast to chat on what fans can expect in Season Two of the series.

Asked about the duo’s relationship, Ridge replied, “I think it’s safe to say they’re an item. They’re absolutely a gay couple and we’re proud of that.”

Fans of the series had surmised as much, especially with the bit of foreshadowing of the relationship in Season One when Orka and Flix visited Flix’s mother bearing a gift of flowers.

Fans of the Star Wars franchise have long called out creators of the sci-fi flicks for the woeful lack of LGBTQ representation.

Back in 2015, the chemistry between Finn (John Boyega) and Poe Dameron (Oscar Isaac) was palatable onscreen in The Force Awakens. But, no same-sex anything ever came up between the characters.

Well, except this fan video mashup:

And characters that are part of the LGBTQ community in the Star Wars comics and books don’t make it into the major feature films.

Reess Kairn, a villain in the 1999 comic book The Bounty Hunters: Aurra Sing, had transitioned from alien to a human woman.

Goran Beviin and Medrit Vasur-Beviin were the first confirmed gay couple in Star Wars literature appearing in the Legacy of the Force series.

Season Two of Star Wars Resistance (nominated for a 2019 Emmy Award for ‘Outstanding Children’s Program’) premieres on the Disney Channel and Disney’s streaming app DisneyNow on October 6th at 10PM.