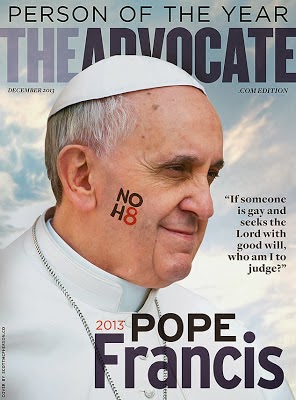 The Advocate has chosen Pope Francis as their 2013 “Person of the Year”:

Edie Windsor is a hero, one well worth recording in history books that retell the story of DOMA’s demise. But she is not the Person of the Year. She couldn’t possibly be, not for The Advocate, where we celebrate the work of so many who contributed to that landmark Supreme Court victory. The most influential person of 2013 doesn’t come from our ongoing legal conflict but instead from our spiritual one — successes from which are harder to define. There has not been any vote cast or ruling issued, and still a significant and unprecedented shift took place this year in how LGBT people are considered by one of the world’s largest faith communities.

Pope Francis is leader of 1.2 billion Roman Catholics all over the world. There are three times as many Catholics in the world than there are citizens in the United States. Like it or not, what he says makes a difference. Sure, we all know Catholics who fudge on the religion’s rules about morality. There’s a lot of disagreement, about the role of women, about contraception, and more. But none of that should lead us to underestimate any pope’s capacity for persuading hearts and minds in opening to LGBT people, and not only in the U.S. but globally.

What do you think? Is Pope Francis the LGBT “most influential Person of the Year?”