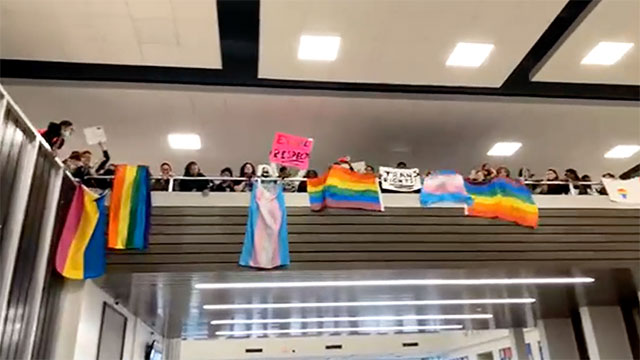 High school students in Temple, Texas, staged a protest after a transgender student was denied access to a female locker room.

In videos posted to social media, students held up trans and rainbow Pride flags as teachers shouted to the student to “Go back to class!”

The protests were in support of a 16-year-old transgender girl who posted to Instagram on Sept. 22 that a Temple High School teacher told her she could not use the female locker room. The post quickly went viral with more than 4,000 likes.

“However, if such activities result in student behaviors such as skipping class or leaving a classroom without permission, then these Student Code of Conduct violations will result in consequences as outlined in the Code of Conduct.”

Parks told 6 News the high school administration met with the student and parent that week to review the district’s Enrollment of Transgender Students guidelines.

Those guidelines include identifying a student by his or her “legal surname;” dressing in accordance with the dress code; and using a gender-neutral restroom or locker room made available to trans students.

You may recall the plight of Gavin Grimm, a trans high school student in Virginia who sued for the right to use rest rooms and locker rooms that aligned with his gender identity.

After legal wrangling that went on for years, Grimm’s journey ended in victory this year when the U.S. Supreme Court refused to hear a last-ditch final appeal from the Virginia school district.