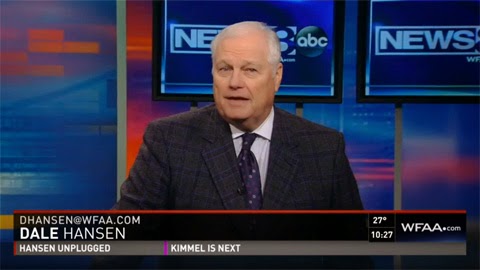 Hansen again brought his common-sense wisdom to the “Hansen Unplugged” segment of his telecast Tuesday in discussing a controversy in the Dallas suburb of Flower Mound.

At a recent basketball game against a rival, more racially diverse school, students were photographed last week holding up signs that read “White” and “Power.” Hansen addressed the issue and it’s origin.

Hansen chided the Flower Mound students’ parents who dismissed the dustup as nothing more than an accidental pairing of signs alongside each other. He shared that his granddaughter recalled attending games at Flower Mound where students would chant “Welfare babies, do you know who your daddy is? Because we know ours.”

He also reached back to his own upbringing in Iowa, where he said his mind was “twisted” by the contrast between his father’s constant and casual use of the “N-word” with praise for the only black family in the county where Hansen grew up.

“Kids have to be taught to hate and it’s our parents and grandparents, and our teachers and coaches, too, who teach us to hate,” Hansen said. “Kids become the product of that environment. I was. And they are.”

“The kids who hold the signs and chant their racist slurs — and it’s not all of them. It never is,” he said. “But their ignorance perpetuates the stereotype of all of us in Texas as a racist, ignorant people.”

Watch Hansen’s take-down below. And bravo once again, Mr. Hansen!