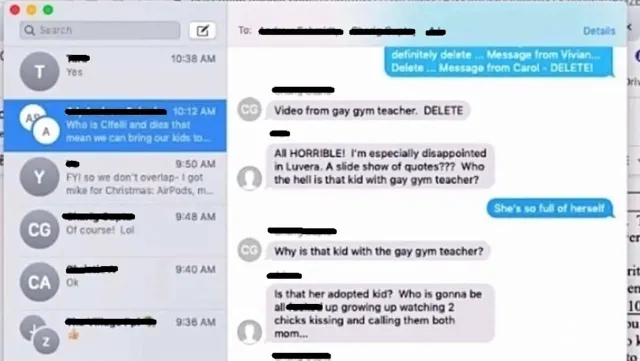 Some high school teachers in New Jersey are in hot water after sharp-eyed students noticed (and screen captured) a homophobic chat among educators left open on a science teacher’s desktop during a Zoom class.

In a group chat dated Wednesday, Dumont High School teachers appear to bash the sexual orientation and lifestyle of one of their co-workers.

“Why is that kid with the gay gym teacher?” asks one, according to a screenshot of the chat posted online.

“Is that her adopted kid? Who is gonna be all f—-d up growing up watching 2 chicks kissing and calling them both mom,” says another, according to the screenshot.

Dumont Mayor Andrew LaBruno said Wednesday the comments were made between Dumont High School teachers during a group chat while the Zoom class was taking place. Someone captured the chat and shared it with others, the mayor said.

In a statement posted to Facebook, LaBruno called the comments “disturbing and extremely appalling” and said he is calling on schools Superintendent Emanuele Triggiano to investigate the matter.

A petition at Change.org calling for the homophobic teachers’ resignations has more than 18,000 signatures at this writing.