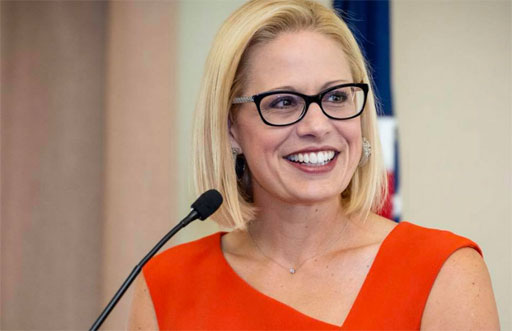 First elected to the U.S. House of Representatives in 2012, Kyrsten Sinema is the first openly bisexual member of the House.

She is the first openly bisexual candidate to run for the Senate from Arizona, and should she win in November, would be Arizona’s first female Senator.

But another woman stands in her way.

Rep. Martha McSally clinched the Republican nod in the race for GOP Sen.Jeff Flake’s seat, who announced early that he would not be running for re-election.

McSally was forced to tact far to the right to defeat her primary opponents, former state Sen. Kelli Ward and virulently anti-immigration former Maricopa County Sheriff Joe Arpaio, who appeared to split the more extreme fringes of the GOP.

McSally was the first woman to pilot a fighter jet.

HRC released the following statement on Sinema’s victory in the Arizona primary:

“HRC proudly supports pro-equality champion Rep. Kyrsten Sinema — a strong, effective leader who puts solutions first and fights to ensure every Arizonan has a shot at the American Dream,” said HRC Arizona State Director Justin Unga. “The stakes in November could not be clearer. In the coming weeks, HRC will continue mobilizing more than 800,000 Equality Voters and tens of thousands of members and supporters in the state to turn out for Sinema.”

The Republicans currently have a slim one vote edge in the Senate. They can only afford to lose one seat in the Senate without losing control of the chamber.

As I’ve written before, this year marks a big uptick in the number of LGBTQ people running for public office at various federal, state and local levels. 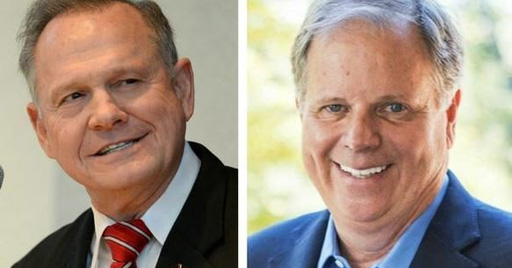 As the U.S. Senate votes to proceed to some kind of movement regarding health care reform, it looks like Senate Majority Leader Mitch McConnell’s plan is to get past the motion to proceed, then offer up the “repeal and replace” bill known as the Better Care Reconciliation Act.

No one really expects that to pass.

From reading sources I follow online, McConnell would then look to put together a handful of amendments that would repeal just certain parts of the Affordable Care Act, something being referred to as a “skinny repeal.”

Not a huge bill, but something that can perhaps pass in the Senate which would then head over to the House for a compromise bill.

If House and Senate Republicans can come to an agreement, it could be at least something Trump and Republicans could call a win.

I don’t think Trump cares what the eventual legislation looks like. He just wants a victory lap of any sort. 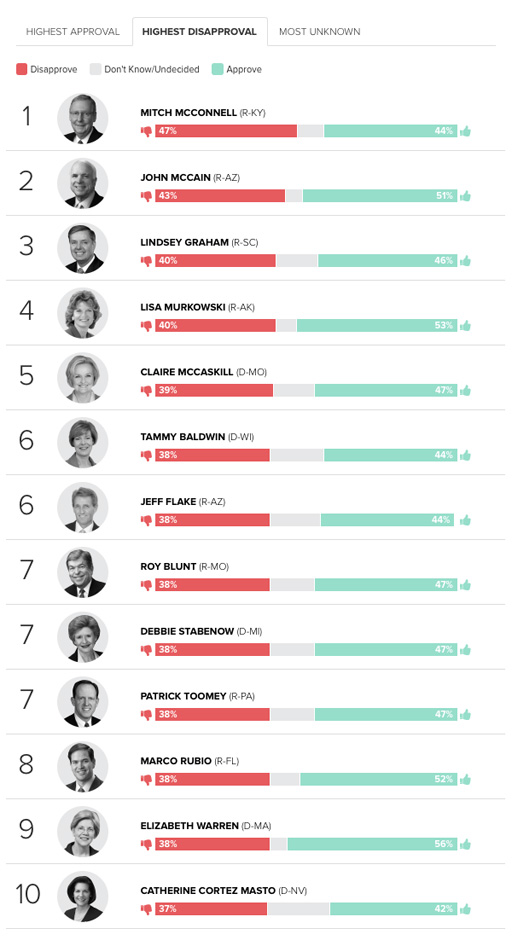 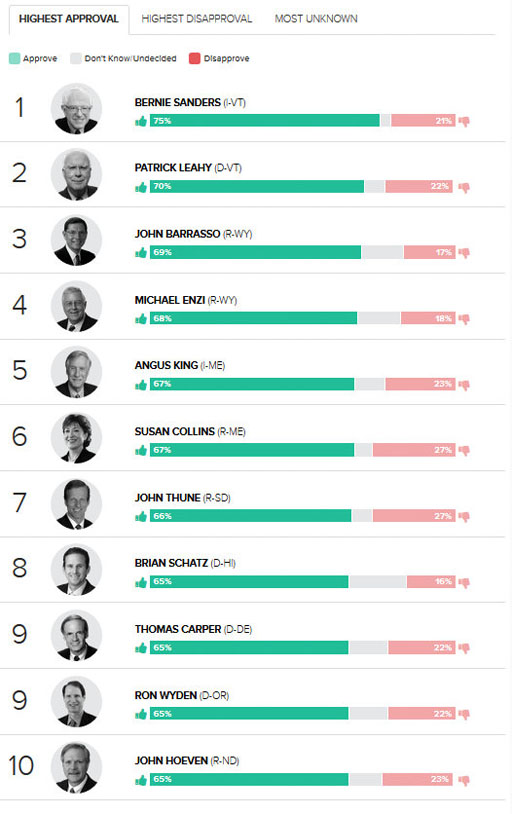 Morning Consult surveyed over 85,000 registered voters to evaluate the job performance of their senators.

Bernie Sanders keeps the title as the most popular senator in America. But it’s not all good news: Since our last rankings (just before the election), Sanders approval has dropped 12 points and his disapproval has increased by 9 points.

Mitch McConnell is still the most unpopular senator in America, and the only senator to have an approval rating that is underwater (44% approve, 47% disapprove). 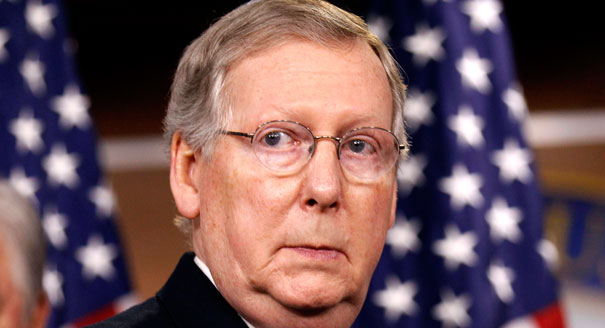 Democrats had argued that Gorsuch, a Colorado federal appeals judge, was simply too conservative, and were nearly united in opposing a cloture vote to end debate on the nominee. Opposing cloture amounts to a formal filibuster, which takes 60 votes to break. With just a few Democrats joining the chamber’s 52 Republicans, McConnell’s only way to confirm Gorsuch was to change the rules.

He began by launching a string of procedural moves to allow a Senate majority to change longstanding rules with a simple majority, or 51 votes.

What this means is, now and moving forward, all Supreme Court nominees will only need 51 votes to be confirmed.

While this serves the Republicans now, at some point in the future the Dems will have the majority. And the shoe will be on the other foot. 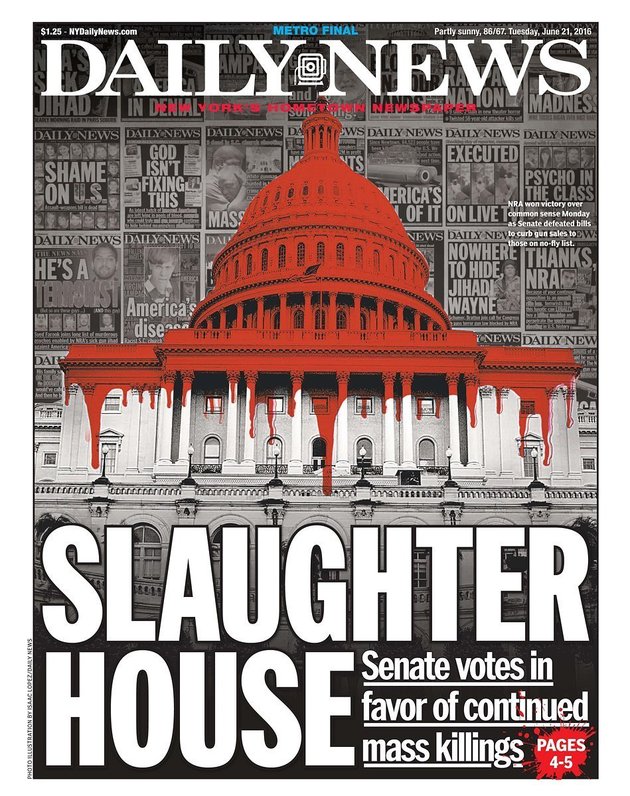 Barely a week after the Orlando nightclub massacre that killed 49 people and just days after a 15-hour filibuster from Democrats, it felt like “Groundhog Day” on Capitol Hill, with votes falling mostly along party lines to defeat four gun control measures. 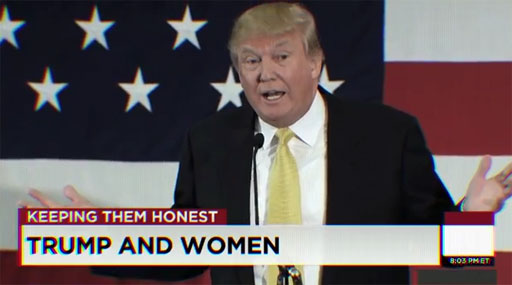 Should Donald Trump become the Republican nominee for president (and it’s looking like that’s where the GOP is headed), you can expect to see a LOT more campaign spots like this from Democratic U.S. Senate candidates who declare their support for the Donald.

From Connor Eldridge, Democratic candidate for U.S. Senate in Arkansas.

A few minutes ago, @marcorubio U.S. Senate staff welcomed him back to the office: pic.twitter.com/neRSJ1ANMD

His staff greeted him with applause as he made his way to his office.

Having missed 34 of 37 roll call votes in the Senate this year, you have to wonder if he remembered how to find his own office.