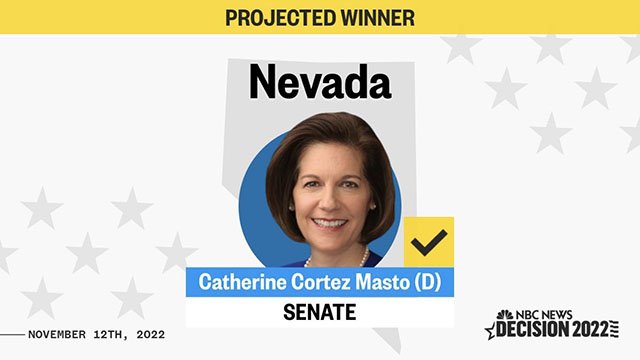 Sen. Catherine Cortez Masto, considered one of the most vulnerable Democrats up for re-election, has defeated her Republican challenger, Adam Laxalt.

The last batch of mail-in ballots were tabulated today showing Masto getting over 60 percent of the 23.3K outstanding votes. She added 14.1K votes to her tally while Laxalt received 8.2K votes. These new numbers give Masto a lead of nearly 5,000 votes.

Her win gives the Democrats 50 seats in the U.S. Senate even before the Georgia runoff on December 6 between Sen. Raphael Warnock (D-GA) and Republican challenger Herschel Walker.

Control of the House has still not been decided, several days after an Election Day that fell short of predictions that Republicans would sweep to power in Washington in a repudiation of President Biden’s leadership. Though Republicans still have an edge in capturing the House, their majority would certainly be small.

But with Ms. Cortez Masto’s victory in Nevada, which was called by The Associated Press on Saturday night, Democrats have nailed down the 50 seats they need to retain control of the upper chamber, a major feat considering that voters typically punish the president’s party during the midterms.

Congratulations, Sen. @CortezMasto — we’re happy to have another champion for LGBTQ+ rights in the Senate! pic.twitter.com/3oj87Val34