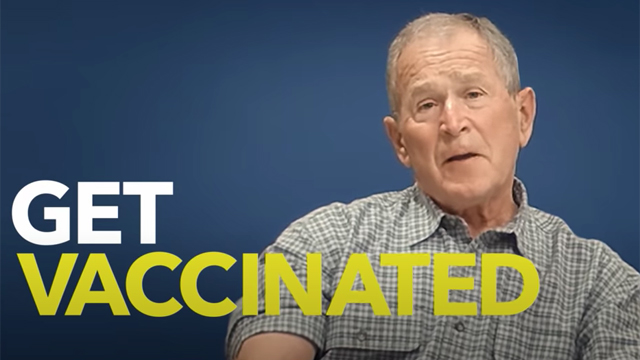 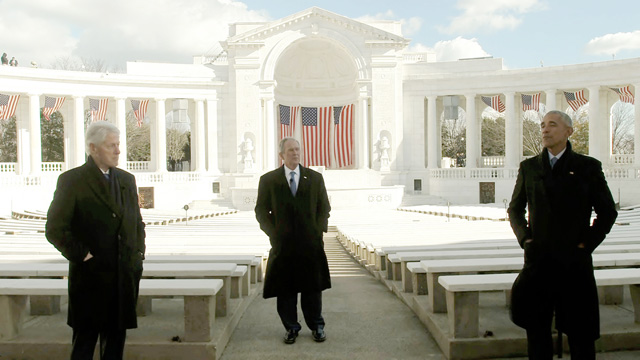 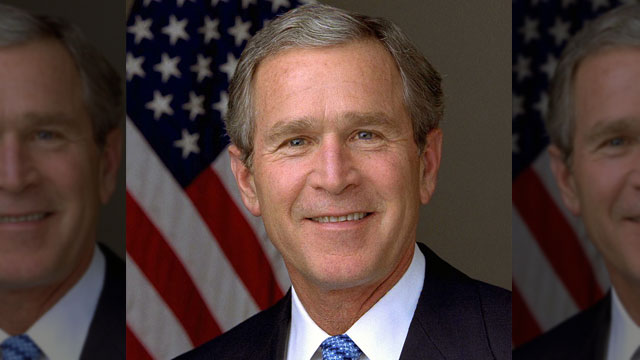 Along the way, Bush thanked Biden for his “patriotic message” in his acceptance last night and noted Biden has “won his opportunity to lead and unify our country.”

Bush also tipped his hat to Donald Trump for his “hard-fought campaign” and acknowledged Trump “has the right to request recounts and pursue legal challenges, and any unresolved issues will be properly adjudicated.”

I just talked to the President-elect of the United States, Joe Biden. I extended my warm congratulations and thanked him for the patriotic message he delivered last night. I also called Kamala Harris to congratulate her on her historic election to the vice presidency.

Though we have political differences, I know Joe Biden to be a good man, who has won his opportunity to lead and unify our country. The President-elect reiterated that while he ran as a Democrat, he will govern for all Americans. I offered him the same thing I offered Presidents Trump and Obama: my prayers for his success, and my pledge to help in any way I can.

I want to congratulate President Trump and his supporters on a hard-fought campaign. He earned the votes of more than 70 million Americans – an extraordinary political achievement. They have spoken, and their voices will continue to be heard through elected Republicans at every level of government.

The fact that so many of our fellow citizens participated in this election is a positive sign of the health of our democracy and a reminder to the world of its strength.

No matter how you voted, your vote counted. President Trump has the right to request recounts and pursue legal challenges, and any unresolved issues will be properly adjudicated. The American people can have confidence that this election was fundamentally fair, its integrity will be upheld, and its outcome is clear. 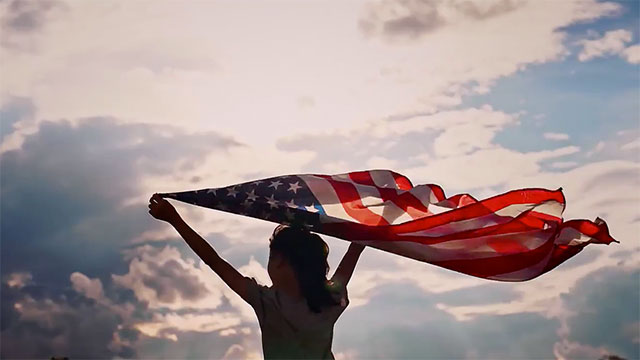 Former President George W. Bush strikes a beautiful balance and tone of what the word ‘united’ can mean to the nation.

I especially was struck by his statement, “Let us remember that empathy and simple kindness are essential powerful tools of national recovery.”

I don’t need to elaborate. You know what I would write next.

I wasn’t a fan of George W. Bush. Not his politics or policy. I’m sure some readers will be surprised I post this.

But despite my disagreements with much of his administration, I am able to recognize that in this message, I find comfort.

Moments like this (or Barack Obama’s a capella rendition of “Amazing Grace” at a funeral service for victims of a mass shooting) remind me of an important, vital role our leaders can play at times of turmoil.

Just watch. It’s not about GWB but having an uplifting minute or two to remind us who we are. 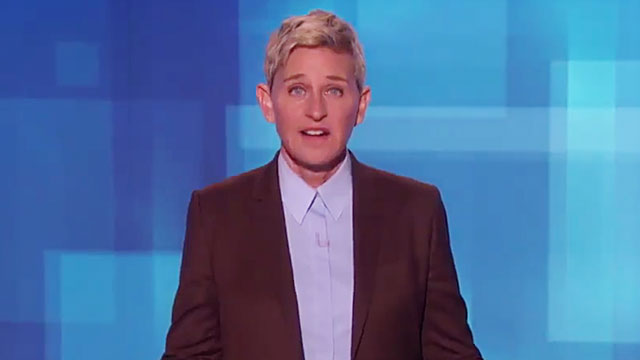 People got upset on Sunday when a photo of Ellen DeGeneres surfaced sharing some laughs with former President George W. Bush at this weekend’s Dallas Cowboys/Green Bay Packers football game.

DeGeneres addressed criticisms that appeared on social media during the opening segment of her talk show on Tuesday. 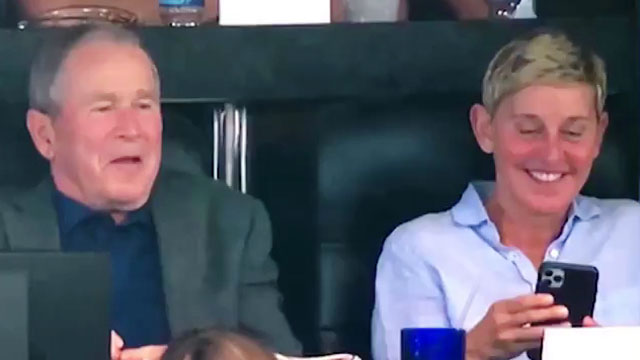 Yes, that was me at the Cowboys game with George W. Bush over the weekend. Here’s the whole story. pic.twitter.com/AYiwY5gTIS 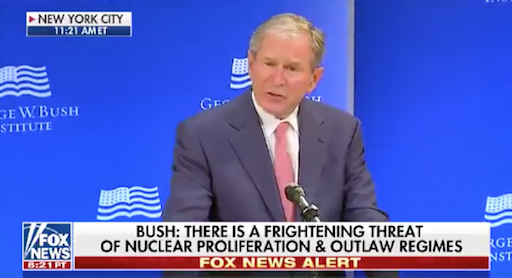 “Argument too easily turns into animosity. Disagreement escalates into dehumanization.”


“We’ve seen nationalism distorted into nativism. We need to recall and recover our own identity.”


“It means that bigotry and white supremacy in any form is blasphemy against the American creed, and it means the very identity of our nation depends on passing along civic ideals.”


“Bullying and prejudice in our public life … provides permission for cruelty and bigotry.”


“The only way to pass along civic values is to live up to them.”

There’s a lot more packed into even just this one minute clip below. 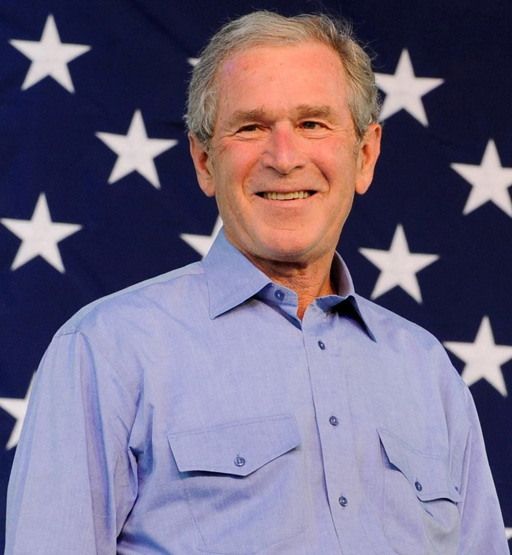 Here’s just an excerpt from Bush’s op-ed published by the Washington Post:

But they should fully fund programs that have proven to be efficient, effective and results-oriented. Saving nearly 12 million lives is proof that PEPFAR works, and I urge our government to fully fund it. We are on the verge of an AIDS-free generation, but the people of Africa still need our help. The American people deserve credit for this tremendous success and should keep going until the job is done. 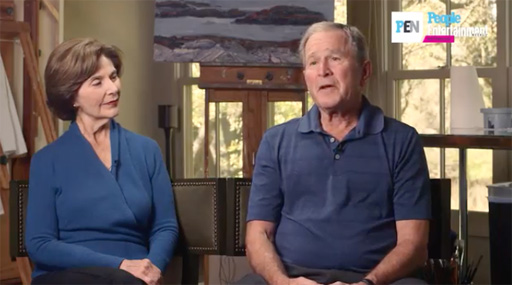 During President Obama’s years in the White House, former President George W. Bush refused (wisely) to criticize his successor saying he didn’t want to make a difficult job that much harder.

A month into President Trump’s administration, though, Bush has voiced some artfully phrased comments about the new Commander-In-Chief.

A spokesman for Bush previously told PEOPLE that neither he nor the former first lady voted for Trump – or for Democratic nominee Hillary Clinton – in November. Both of the Bushes, who had campaigned for Bush’s younger brother Jeb in the 2016 Republican primaries, cast write-in votes on Election Day for a candidate they did not reveal. 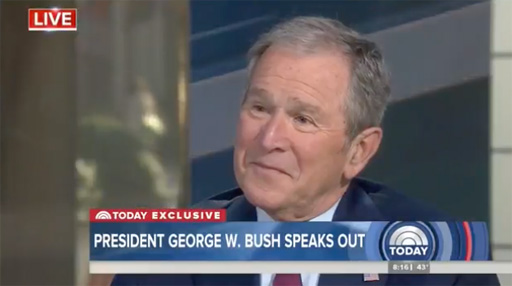