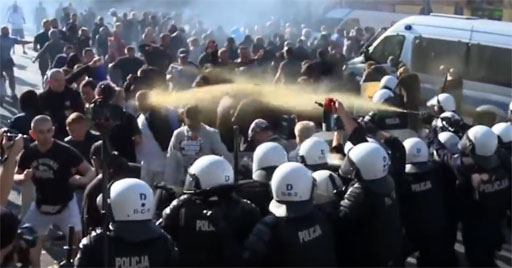 The Associated Press is reporting that police in Poland used a water cannon and sprayed tear gas on far-right protesters who attempted to stop the first Pride parade in the eastern city of Lublin in Poland.

Rainbow-colored flags and banners were carried aloft for the parade by over a thousand LGBTQ participants gathered Saturday in Lublin as 300 right-wing haters blocked the parade’s path.

Political authorities had canceled the march but Poland’s Court of Appeal overruled the ban on Friday (12 October) due to freedom of assembly laws. 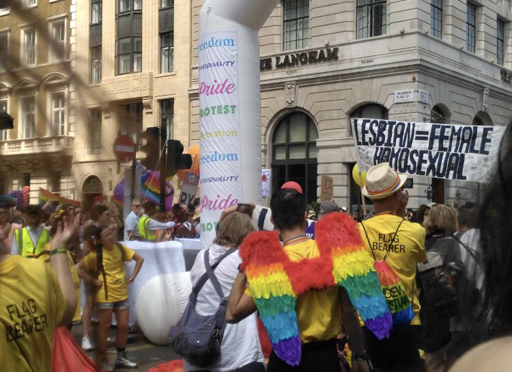 This is just terrible. Not how our community should be acting.

According to Gay Star News, a group of transphobic lesbians commandeered the lead spot for the Pride Parade in London today, and handed out flyers protesting transgender folks.

A group of lesbian activists blocked the start of the Pride in London march today (7 July) in protest against transgender women. A group of eight women stormed the parade route without accreditation. Then five of them laid down on the road in front of the parade and draped a banner over them.

The banner read: ‘Transactivism erases lesbians’. They then blocked the parade route for about 10 minutes. One of the activists shouted out: ‘A man who says he’s a lesbian is a rapist.’

The group also had a banner that said ‘Lesbian = female homosexual’, as well as flyers with the organization ‘Get the L out’ as the headline.

PinkNews reports that at the end of the parade route, a confrontation erupted between the women and other LGBT attendees, angry that Pride had been led by a group seeking to exclude trans people.

One of the people involved in the confrontation told PinkNews, “They hate trans people, they hate sex workers … they are just as bad as bigots saying gay people go to hell. It’s disgusting, this is a problem with what Pride has become.”

The organizer of the parade, Pride In London, issued this statement:

“Every year, Pride is attended by hundreds of thousands of people who demonstrate that Pride still matters. Given the hot weather and in the interest of the safety for everyone attending today’s event, the parade group was allowed to move ahead.

“We do not condone their approach and message and hope the actions of a very small number people does not overshadow the messages of the 30,000 people marching today.”

London Pride this year, first group to pass was TERFs with a “transactivism erases lesbians” banner. Almost got in trouble with police shouting at them to fuck off. Pride is a riot, and I won’t stand quietly while I’m told I’m not welcome at pride as a trans lesbian.

So they’re allowing a group of TERFS to start the pride parade in London, and now the group are protesting by lying on the floor stopping the parade from happening. Cba man pic.twitter.com/Ff3jfQ1gko

Imagine being trans, coming to LGBT Pride in London, and discovering that there is a group at the front with a banner declaring that trans folks “erase” lesbians. I hope @PrideInLondon will act quickly and decisively – from one feed I saw they appeared to be leading the march!

BREAKING: @PrideInLondon organisers admit they decided to allow anti-trans protesters to lead the parade, “in the interest of safety”. pic.twitter.com/Gt3gHVpZa6

Disgraceful that anti-trans protestors were allowed to lead #prideinlondon today. @prideinlondon need to apologise immediately for allowing this to happen. These people should never be allowed to march at pride again. LGBT Labour stand shoulder to shoulder with our trans members.

Someone tell the terf lesbians that have invaded the front of the london pride march to piss off back to the 1970’s. 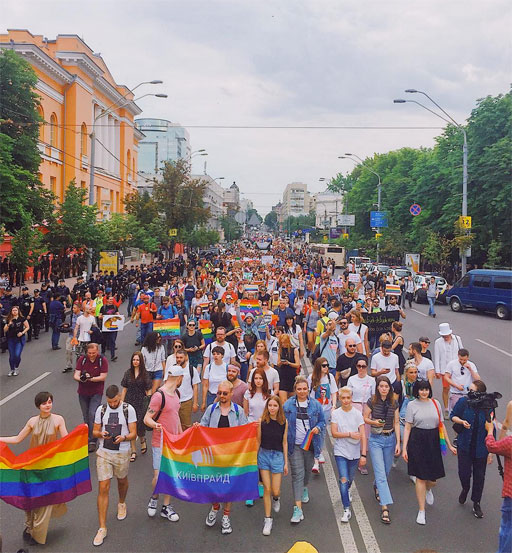 Prior to the start of Kiev’s Pride Parade today, Ukrainian police swarmed, tear-gassed and arrested 56 anti-LGBT protesters who had attempted to block a portion of the parade route.

Ukrainian police said they had detained 56 members of far-right radical groups in Kiev on Sunday after scuffles before the capital’s gay pride march. Early in the morning, more than 150 far-right protesters had sought to block off the route of the march through central Kiev.

Small clashes broke out when police in riot gear moved to clear the street. “Several men who resisted and used gas canisters against law enforcement officers were detained,” the police said in a statement.

Far-right group C14 said police had surrounded its protesters, attacking them with batons and tear gas. “Look at how they protect ‘sexual minorities’ and violate the rights of regular Kiev citizens,” it said in a post on Facebook. More people were detained in a subsequent altercation near the Opera House, police said.

Fortunately, the parade then went off without any further incident. According to organizers, there were over 6,000 participants in the Pride vent.

Check out the first video below shot from a drone. No sound, but its amazing to get a clear view of how many riot police were there and how they surround and then move the protesters.

The second video shows the celebrants at the parade. 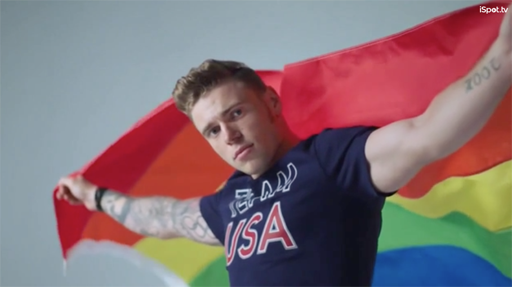 Miami Beach Gay Pride has announced woofy out Olympian Gus Kenworthy will serve as Grand Marshal for the event on April 10.

According to a press release from the pride committee, the Olympic silver medalist is “thrilled to lead the parade at Miami Beach Gay Pride.”

For its 10-year anniversary, Miami Beach Gay Pride 2018 will feature a week’s worth of events, April 2-8, which include highlights such as Pride Lights the Night, a tribute to the PULSE nightclub victims; the Miss Pride drag pageant; a Friday night VIP Gala; Saturday beach party and festival; and Sunday parade and festival.

Disco legend Thelma Houston (“Don’t Leave Me This Way”) will perform at 8PM on the pride mainstage.

After the Board of Aldermen in Starkville, Mississippi, voted against issuing a permit to allow the town’s first Pride parade, organizers filed a federal lawsuit saying the Board’s decision to ban speech by Starkville Pride on city streets is a violation of the First Amendment and its discriminatory treatment, based solely on LGBT-related animus, violates the Fourteenth Amendment’s Equal Protection Clause.

And so, the Starkville Board of Aldermen held another vote tonight to consider the permit.

Mayor Spruill had previously denounced the denial saying, “I think it sends a message that we are not the inclusive community that I believe us to be.”

Starkville Pride was live-tweeting during the meeting:

A representative of Starkville High School said she is speaking on behalf of everyone from the school who wanted to come but were “too scared.”

A veteran speaks in favor of Pride, using the Bible as a means of defense. He said that the Aldermen do not get to “bully” the people of Starkville.

“Bailey McDaniel, Emily Turner and Starkville Pride stood up to vindicate the right to freedom of speech held by every American, no matter whether they are straight or gay.

What happened at tonight’s meeting was a victory not only for our clients and for their equal dignity under the law, but also for the core principle that in this country, we do not restrict a person’s ability to speak based on whether or not we agree with what they have to say.

We look forward to celebrating Pride with the LGBT community of Starkville and the rest of Mississippi on March 24.”

The LGBT community of Starkville, Mississippi, was informed last week that an application for a permit to organize what would have been the town’s first Pride parade was denied after a 4-3 vote by the town’s aldermen.

To add to their frustration, the organizers weren’t given a reason for the denial. Three of the aldermen who voted against the permit left through the back entrance.

At the city council meeting, 16 people showed up to support the parade, only two spoke against it. One of the naysayers told the city council a Pride parade would turn the town into “a Sin City.”

Starkville Mayor Lynn Spruill denounced the decision saying in a statement it sent a message that the small college town is not “inclusive.” The mayor also pointed out that Oxford, Mississippi, where the University of Mississippi is based, has held gay pride parades for several years.

With no explanation offered, the aldermen of Starkville, Mississippi, voted to deny organizers of a proposed Pride Parade a permit for the event.

The city council voted 4-3 against granting the permit to Starkville Pride even though 16 citizens showed up to speak in favor of the event.

“It’s unfortunate that you go through the process, you do everything you’re supposed to do and you get denied, really without any explanation as to why,” alderman Jason Walker, who voted to approve the permit.

Only two spoke against allowing the event.

Resident Dorothy Isaac said she was against the parade because “God created Adam and Eve.”

“Do not turn our city into a sin city,” Isaac said. “It should not be this.”

Starkville is a college town home to Mississippi State University. You can imagine there might be several LGBT students who would have liked to take part in a Pride event.

Starkville’s mayor, Lynn Spruill, denounced the decision saying “I think it sends a message that we are not the inclusive community that I believe us to be.”

With Starkville being home to Mississippi State University, Mayor Spruill noted that Oxford, Mississippi, where the University of Mississippi is based, has held gay pride parades for several years. 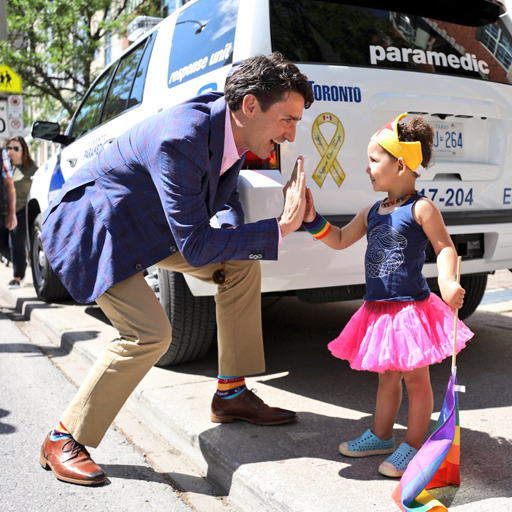 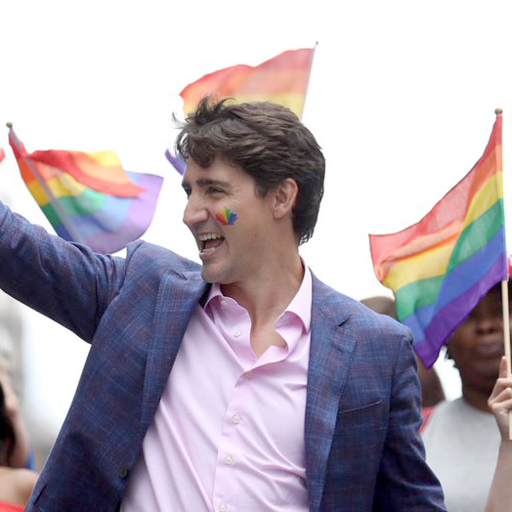 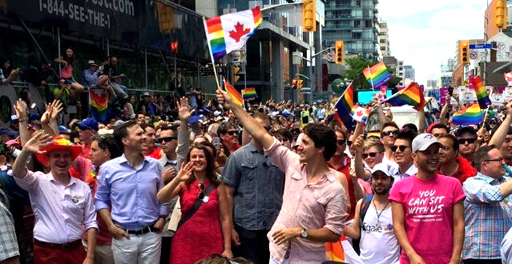 Toronto Pride Parade kicked off today with a history making moment as Justin Trudeau becomes the first sitting Prime Minister of Canada to march in an LGBT Pride Parade.

From the Ottawa Citizen:

Other notable politicians who will march include Ontario’s premier, Kathleen Wynne, and the mayor of Toronto, John Tory.

Before the parade, Trudeau attended an outdoor church service in the heart of the city’s gay village where he sang along to Lady Gaga’s “Born This Way.”

Here he is! @JustinTrudeau #PrideTO pic.twitter.com/cKH7Ye3QDh

And just like that history is made! @JustinTrudeau becomes first prime minister to March at pride. –@Radio_Brent pic.twitter.com/T6c61fWg48