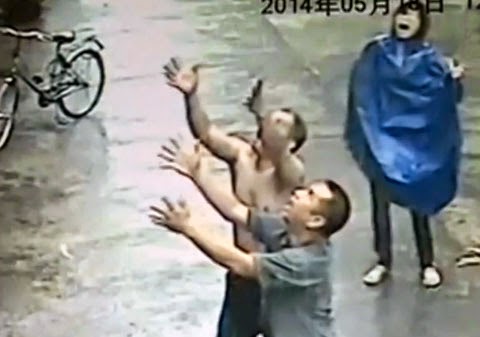 From EuroNews: A man successfully caught a one-year-old baby who fell from a second story window on Sunday in a south China county, according to local reports.

The baby, who it was believed went looking for his mother, climbed onto the window during a heavy thunderstorm.

Mr. Li, a resident, hurried across the road and held out his arms, according to the surveillance video footage, in the hope of catching the falling baby.

Mr. Hu, also a local resident, also rushed to the site to join in the rescue, along with other nearby residents who put several pieces of cardboard and a sofa on the ground under the window, the video footage showed.

Wow. I can’t imagine behavior like this in the US with TSA.

From Towleroad: Yan Linkun, a member of the Chinese People’s Political Consultative Committee (CPPCC) from Shizong county, Yunnan Province, did not react well after he missed his plane last week. Yan had gone to have breakfast after purchasing his ticket but did not make it back in time to board.

He then destroyed everything in sight.

No sound, but the action gets going at the 1:30 mark. Really kind of amazing.