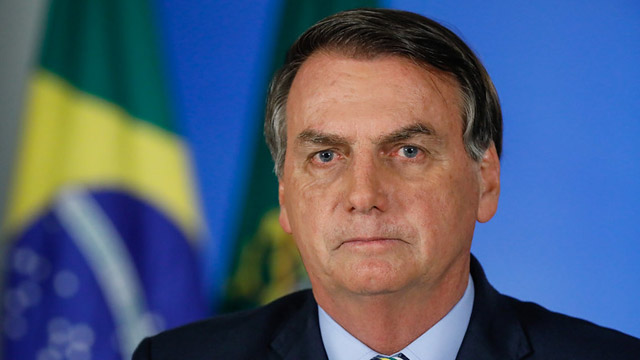 President Jair Bolsonaro of Brazil told the people of his country they need to stop “fussing and whining” about the surging COVID-19 cases and move on.

Bolsonaro has repeatedly denied the severity of the pandemic even as the country is seeing record cases of coronavirus.

Brazil has the world’s second-highest death toll over the past year, after the United States. While the U.S. outbreak is ebbing, Brazil is facing its worst phase of the epidemic yet, pushing its hospital system to the brink of collapse.

The Health Ministry registered 75,102 additional cases of coronavirus on Thursday, the most in a single day since July and the second-highest on record. Brazil also recorded 1,699, decreasing slightly from the previous two days of record deaths.

Reuters adds that only 3.5% of Brazil’s population has received even one shot of vaccine for the coronavirus.

No, Donald Trump Jr., the coronavirus has not ‘magically’ gone away now that the 2020 election has passed.

With the virus surging in so many places both here and around the world, I wanted to create a way to share news related to the pandemic in an abbreviated manner. For more information on any of the stories below, please feel free to click the links.

• CBS News: Texas became the first state to surpass 1 million confirmed cases of COVID-19 on Tuesday. The second-most populous U.S. state, Texas now has more coronavirus cases than all of Italy, which was previously one of the major hot spots of the virus. California is close behind with over 986,000 confirmed cases, as is Florida with more than 852,000.

• ABC News: Faced with more than 2,000 new daily COVID-19 cases in his state and hospitals at capacity, Utah’s Gov. Gary Herbert has declared a state of emergency and issued a mandate for all residents to wear masks in public until further notice. Herbert’s announcement implored all state residents “to do everything in your power to stop the spread of this disease.”

• CNN: Following the positive news regarding the effectiveness of Pfizer’s coronavirus vaccine, Dr. Anthony Fauci told CNN’s Jake Tapper that an average American could potentially have access to a coronavirus vaccine by April of 2021.

Dr. Anthony Fauci tells @jaketapper that an average American could potentially have access to a coronavirus vaccine by April of 2021. pic.twitter.com/u2yn1hI0Mp

• Pink News: Brazil’s homophobic president Jair Bolsonaro has told his country to accept coronavirus and stop dealing with it like “a country of fags”. The far-right leader made the remarks as his country has suffered over 5.7 million infections and 163,000 deaths from coronavirus. “We have to stop being a country of fags… We have to face up to it and fight. I hate this faggot stuff.”

• Nevada Current: With the coronavirus surging in Nevada and nearly every state in the nation, Gov. Steve Sisolak urged people Tuesday to “to operate in a ‘Stay at Home 2.0’ mentality to get things under control so our public health response infrastructure can catch up.” Nevada has seen more than 1,300 cases a day over the most recent seven day period and hospitalization rates not seen since August.

• The Hill: A top health department official in Wisconsin says that the state is nearing a tipping point at which some patients who need lifesaving care will be unable to receive it due to overcrowding in hospitals resulting from the COVID-19 outbreak. 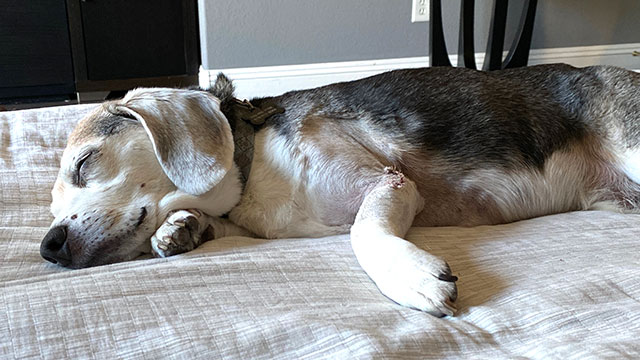 • Snoop Watch: Our new 14-year-old beagle rescue, Snoopy, is doing great (above). After having some tumors removed last week, he got some stitches out today. Plus, he had an adventure at PetSmart on the way home, so he’s a bit tuckered out. But awesome 🙂

• The Advocate: Have you heard the one about Brazil’s virulently homophobic president who was so resistant to wear a face mask during the coronavirus pandemic he told aides, “Masks are for fa**ots?” Oh, and then he tested positive for COVID-19. #LifeComesAtYouFast

• KIT212: Kenneth rounds up the best of local LGBTQ rags including this week’s Music Issue of California-based Gloss Magazine: 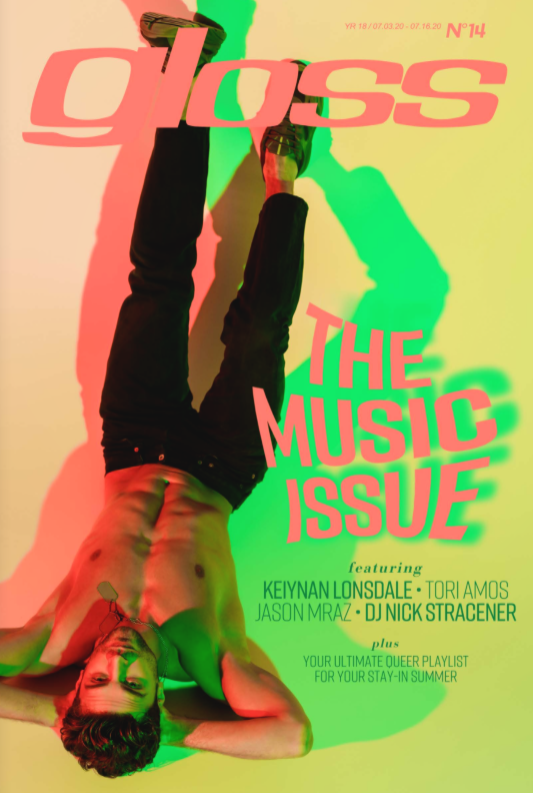 • Instinct Magazine: Chicago’s LGBTQ neighborhood, currently known as ‘Boystown,’ may get a new genderless moniker if a Change.org petition has its way.

• Baltimore Sun: Packed elevators, crowded committee rooms, and legislators sitting shoulder-to-shoulder on the House and Senate floor. All without a mask in sight. Those were common scenes at the Mississippi Capitol in June and now at least 26 lawmakers have been diagnosed with the coronavirus in the biggest known outbreak in any state legislature in the nation.

‘Las Vegas Karen’ and her friend came to my town, Las Vegas, and were gobsmacked to learn they have to wear masks around people. She refused and began Facebook Live streaming her exit where she declares face masks are worse than coronavirus and Dr. Anthony Fauci recently said they are ‘symbolic’ and don’t do anything useful (he didn’t say that).

With security guards trying to escort them out, they protest how their constitutional rights are being violated (they aren’t) and how it’s illegal to require masks in casinos and restaurants (it’s not). Have you ever heard “No shirt, no shoes, no service?” Miss Karen, there’s no constitutional right to gamble in a casino…ok? 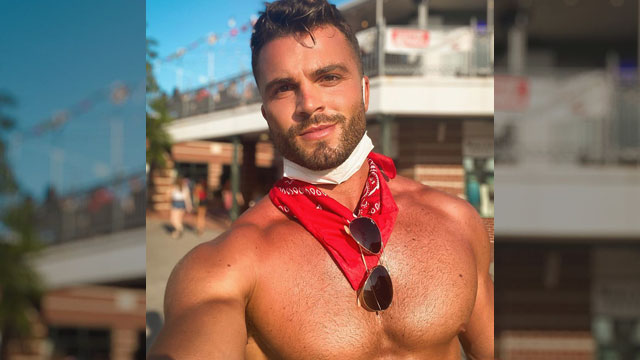 • InstaHunks: Gustavo Naspolini (above) knows how to find his ‘post-beach/sunset light’ on the Rehoboth boardwalk.

• Pink News: The Netherlands’ House of Representatives voted 124 to 26 in favor of a measure to amend the country’s constitution to add explicit protections based on sexual orientation. The measure now heads to the 75-seat upper chamber of the country’s Parliament. In 2001, the Netherlands was the first nation in the world to legalize marriage equality.

• Brazil: President Jair Bolsonaro, the virulently anti-LGBTQ leader of the South American country who recently tested positive for COVID-19, told aides and visitors to his office that “Wearing masks is a faggot thing.”

• WHJL: Sonya Holt, the homophobic Tennessee resident who became a viral sensation after footage of her harassing a Black Lives Matter protester went viral, has lost her job over her hideous behavior. Among other things, video captured Holt telling a protester, “You’re a gay homosexual piece of crap who’s going to burn in hell.”

• The Advocate: In a decision that has broad implications for LGBTQ+ workers, the U.S. Supreme Court Wednesday ruled that federal anti-discrimination laws do not apply to teachers at church-sponsored schools if instruction in religion is part of their jobs. In recent years, there have been many teachers and other church employees fired for being LGBTQ+, often because they had married a same-sex partner.

• Kenneth-in-the-212: Check out this deft parody of the now-infamous Corey Hannon, who took to the beaches of Fire Island this past weekend believing he had COVID-19. In a follow-up tweet, Chase shared that many of his followers on Twitter didn’t get the ‘parody’ part. LOL

my mentions still full of people that think this is real lmao pic.twitter.com/ngVgMsWqRn 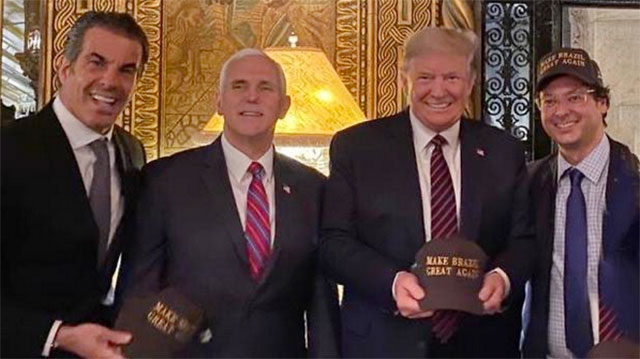 The Washington Post is reporting a Brazilian official who attended meetings with Donald Trump and Mike Pence at Mar-a-Lago on Saturday has tested positive for coronavirus.

Fabio Wajngarten, a spokesman for Brazilian President Jair Bolsonaro, tested positive for covid-19, Brazilian officials said. Wajngarten posted a photo to his Instagram account where he is standing directly on Trump’s left side.

Bolsonaro has reportedly canceled his official agenda on Thursday and remains at the presidential palace. He is under medical observation, according to two people close to him who requested anonymity because the information isn’t public.

Trump said he “isn’t concerned” about the development, according to a White House pool report.

The guy standing to Trump’s left just tested positive for coronavirus, according to Brazilian media. Fabio Wajngarten posted this photo, taken during meetings at Mar-a-Lago, five days ago. pic.twitter.com/qioU4qIlxl 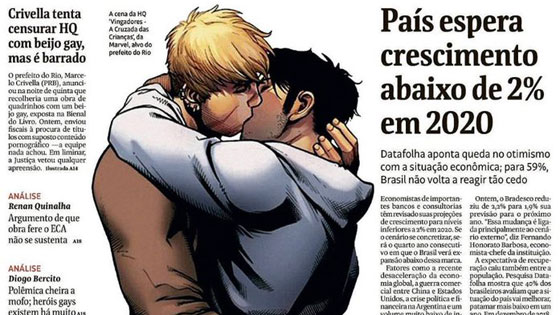 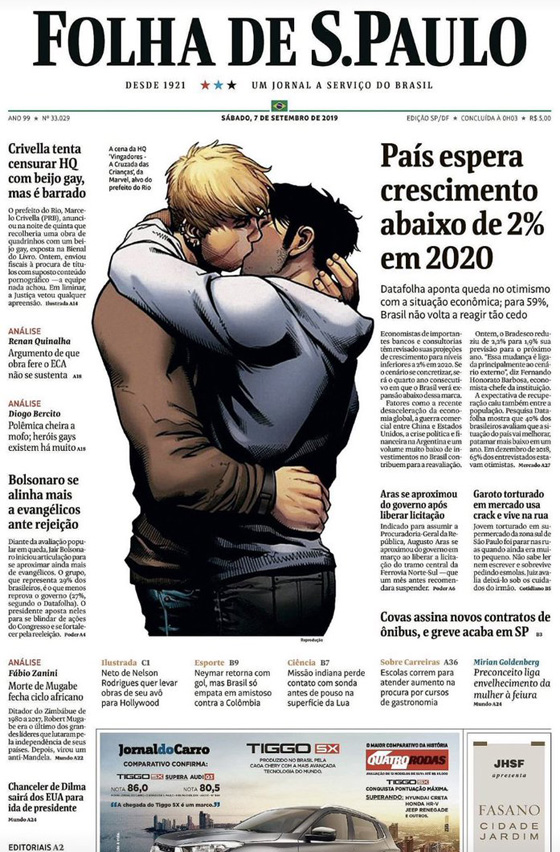 Last week, the mayor of Rio de Janeiro called for a ban on superhero comic book because of ‘sexual content’ he deemed unsuitable for minors.

The ‘content’ in question occurs in the three-year-old Marvel publication Avengers: The Children’s Crusade. In one panel of the graphic novel, the characters Wiccan and Hulkling, who are in a committed relationship, engage in a kiss.

Why the 2016 publication suddenly caught the eye of the Mayor Marcello Crivella, a former evangelical pastor, now is unclear. But Crivella called for the comic to be banned from the Riocentro Bienal do Livro, Brazil’s most important literary event.

But before authorities could remove the graphic novel, word spread and all copies were almost instantly snapped up by fans.

And now, Brazil’s Supreme Court has blocked the efforts to censor the Marvel publication.

“Attorney General Raquel Dodge challenged the move by Crivella, a former evangelical pastor,” reports ABC News. “She said allowing the mayor to remove books goes against freedom of expression and the free exchange of ideas.”

According to the report, a lower court initially supported the mayor, but chief justice José Dias Toffoli “ruled in favor of Dodge on Sunday, blocking the mayor from removing any books.”

And just to put a point on the subject, Brazil’s largest newspaper Folha De S.Paulothrew shade by printing the image on the front page of the publication.

It’s perfectly legal to be LGBTQ in Brazil (the country has legalized same-sex marriage), but thanks to statements and actions by virulently anti-LGBTQ president Jair Bolsonaro, the gay community has reasons to be concerned.

Bolsonaro has announced plans to remove mentions of LGBTQ people from textbooks and classrooms in schools; he’s posted tweets denouncing the country’s annual Carnival event for being too risque; told the world “Brazil can’t be a country of gay tourism” because “we have families.”

He’s even told publications he’d rather have a dead son than a gay son.

But, today, we celebrate this small triumph (and epic trolling) over hate.

• We remember that bisexuals are part of Pride Month, too

• Do your music preferences reveal if you like the top or bottom bunk? 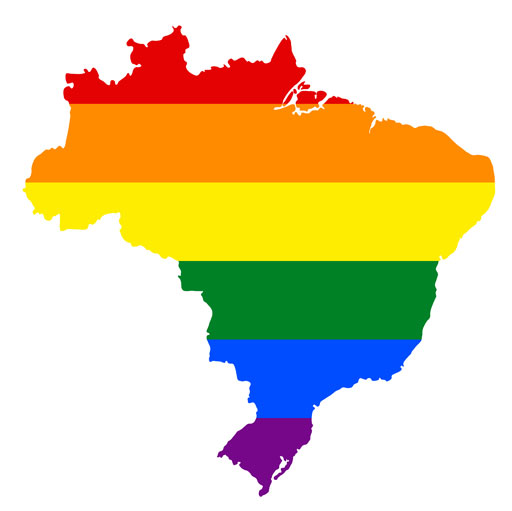 Brazil’s high court has ruled that acts that discriminate against LGBTQ people will now be included in the South American country’s laws prohibiting racism.

Passed in 1989, the country’s statutes outlawing racism allow prison sentences of up to five years.

USA Todayreports that Justice Carmen Lucia noted in her ruling that “the LGBT community is treated differently in Brazil’s ‘discriminatory society,’ and as a result face a higher rate of violence.”

Although Brazil legalized same-sex marriage in 2013, violence against LGBTQ individuals is common.

Grupo de Bahia, an organization that tracks LGBT hate crimes, reported in January 2018 that there were 387 murders in Brazil during 2017. All of those were directly related to homophobia or transphobia. In 2018, the number of LGBTQ people murdered rose to 420.

Activists say the increase in violence correlates to some degree with the election of virulently homophobic President Jair Bolsonaro, who took office in January this year.

Bolsonaro has made no secret the disdain he holds for LGBTQ people.

His record as a lawmaker includes a long history of anti-LGBTQ votes, and he promised to erase pro-LGBTQ and pro-women movements during the 2018 campaign.

In a 2011 interview, he told Playboy Brazilhe would prefer to have a dead son than a gay son

And the new president has also downplayed “gay tourism” in his country.

“If you want to come here and have sex with a woman, go for your life,” he told Crusoe Magazine in April. He added that Brazil “cannot be a country for gay tourism because we have families here.”