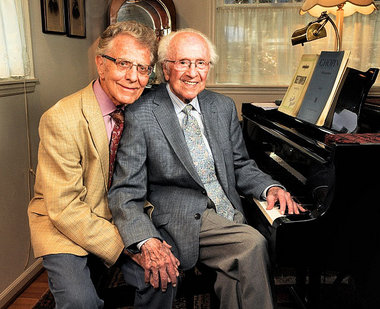 Frederick Marvin keeps a day book for every year. The 91-year-old Syracuse concert pianist has boxes full of the little blacks books where he wrote what he ate, what music he played, where he traveled and who he met.

In his Syracuse house on a recent afternoon, he pulled the book from 1959 out of his basement. He was 39. Marvin flips to April 22. Halfway down the page, amid details about his travels, is this: met Ernst Schuh. It was a meeting that would change his life.

They two men found each other in the Abbey of St. Florian, an Austrian monastery. They both were there to see the grave of composer Anton Bruckner. Marvin was traveling across Europe, playing concerts. Schuh, who survived the battle of Stalingrad in World War II, was an opera critic in Vienna.

They have been together ever since. Now, 52 years later, the music lovers with matching hearing aids are getting married. Today in Syracuse’s City Hall, Mayor Stephanie Miner will perform the ceremony.

Read more of this beautiful story at syracuse.com