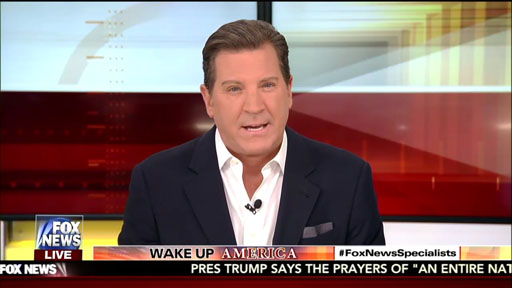 You’ll recall last week, Yashar Ali reported for HuffPost that Bolling had texted pics of his genitals to several women over the years. Bolling was suspended from Fox News pending review.

Ali cites 14 sources for his reporting; highly doubtful he would write an article without a LOT of backup.

Yashar Ali, a contributing writer for HuffPost, reported on Friday that several years ago Bolling sent lewd text messages that included photographs of male genitalia to two female colleagues at Fox. The next day Bolling was suspended and Fox launched an investigation by the same law firm that handled probes into the conduct of former host Bill O’Reilly and former Fox chairman Roger Ailes.

After the initial report, Bolling said, via his lawyer, that he “recalls no such inappropriate communications, does not believe he sent any such communications, and will vigorously pursue his legal remedies for any false and defamatory accusations that are made.”

On Wednesday, Bolling filed a “summons with notice” in New York State Supreme Court against Ali, seeking $50 million in damages for defamation. Ali must respond within 20 days, demanding that Bolling file a complaint, after which Bolling will have 20 days to file his response before the suit goes forward.

Bolling is represented by Michael Bowe from the same law firm as Marc Kasowitz, who was President Donald Trump’s personal attorney until last month.

“This anonymously sourced and uncorroborated story is false, defamatory, and obviously intended to destroy this good man’s career and family. We will defend Eric aggressively in court, where actual facts, based on evidence, testimony, and cross-examination, will belie these anonymous accusations,” Bowe said.

It’s notable that Bolling is only targeting Ali in his legal maneuver, not HuffPost who could easily settle a lawsuit. Bolling is clearly looking to bully Ali.

Ali stands by his story and his sources, telling Politico he will “protect my sources, especially the victims, at all costs.”

Responding to the news, Lydia Polgreen, editor in chief at HuffPost, issued a statement which read, “Yashar Ali is a careful and meticulous reporter. We stand by his reporting.”

Just received a summons. Eric Bolling is suing me for defamation – $50 million in damages. I stand by my reporting + will protect my sources

It’s important to note that Bolling’s summons does not include HuffPost – he is coming after me personally. I’m a big boy…but very telling https://t.co/nvludsIV87

Not going to stop reporting on Eric Bolling or anyone else. I’ve had family members killed/jailed in Iran, a lawsuit isn’t going to scare me https://t.co/nvludsIV87

People have been kind enough to offer financial support etc – not necessary. Instead please donate to @pressfreedom https://t.co/dI9C3GEqlB

Should be noted the story had FOURTEEN sources and Bolling isn’t suing HuffPost, the publisher that could theoretically pay $50 million https://t.co/2EhBYWXqXk

Here’s a sample of the kind of “reporting” Bolling does on Fox News: