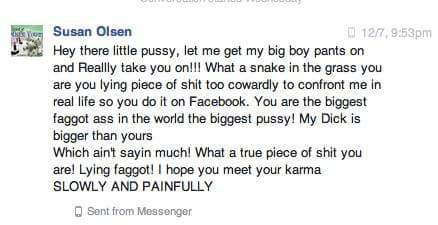 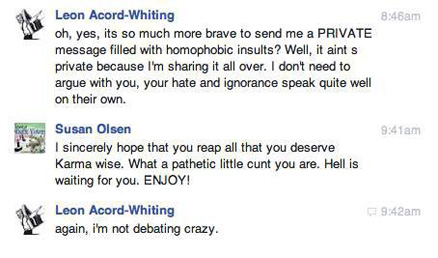 Susan Olsen, famous for playing the precocious  “Cindy Brady” 40 years ago on The Brady Bunch sitcom, got the boot from her Los Angeles talk radio gig after using extremely anti-gay slurs in a Facebook message made public.

The politically conservative Olsen, who played Cindy Brady on the classic sitcom, was incensed when out actor Leon Acord described as a ‘Trump fanatic’ and called for her to be fired from the radio show in Facebook post. He accused Olsen of spreading misinformation.

She sent him a private message calling him a ‘faggot’ more than once and a ‘pussy’ among other crude insults.
Acord screenshot the messages and made them public.

The station said in a statement on its Facebook page that it had ‘severed ties’ with Olsen but did not use her name in sharing the news.

‘LA Talk Radio takes pride in its close and collaborative relationship with the LGBT community, and will continue to provide a home for those who have hopeful and positive messages of togetherness and tolerance to share with our listeners.’

‘We will not tolerate hateful speech by anyone associated with our radio station and have severed our ties with a host that veered off the direction in which we are going.

‘Thank you for your loyalty and continued support. LA Talk Radio stands for love and community, and we will always support all of our friends around the world.’