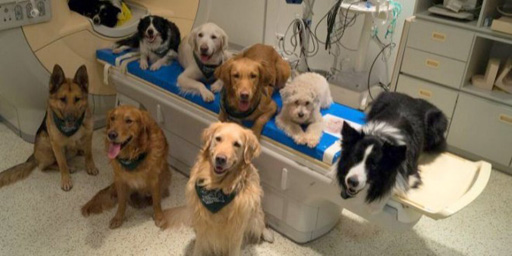 A study done in Budapest shows that dogs not only understand our tone of voice, but they also understand many of the words we use.

To determine this, Attila Andics and colleagues at Eötvös Loránd University in Budapest recruited 13 family dogs — mostly golden retrievers and border collies — and trained them to sit totally still for seven minutes in an fMRI scanner that measured their brain activity. (The pups were not restrained, and they “could leave the scanner at any time,” the authors assured.)

A female trainer familiar to the dogs then spoke words of praise that all their owners said they used — “that’s it,” “clever,” and “well done” — and neutral words such as “yet” and “if,” which the researchers believed were meaningless to the animals. Each dog heard each word in both a neutral tone and a happy, atta-boy tone.

Using the brain activity images, the researchers saw that the dogs processed the familiar words regardless of intonation, and they did so using the left hemisphere, just like humans. Tone, on the other hand, was analyzed in the auditory regions of the right hemisphere — just as it is in people, the study said.

And finally, they saw that the dogs’ “rewards center” — which is stimulated by pleasant things such as petting and food and sex — did the brain equivalent of jumping and yelping when positive words were spoken in a positive tone.