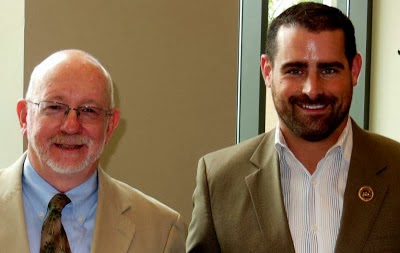 State Reps. Brian Sims and Steve McCarter, both Democrats from the Philadelphia region who are sponsoring a gay-marriage bill, issued a statement Monday within hours of Christie’s announcement that he was dropping his court challenge to New Jersey’s law.

“Once again, we’re seeing that even conservative Republicans are realizing that all Americans deserve equal rights,” Sims said. “Unfortunately, here in Pennsylvania, where LGBT Pennsylvanians lack even a single LGBT civil right, some members of the Republican Party would sooner be the Republicans of 1955 rather than 2025. It’s unconscionable that Pennsylvanians who get married out of state can still be fired for putting a wedding photo on their desks.”

“It’s a black eye on the state of Pennsylvania that nearly all of our neighboring states have decided to enter the 21st century and grant equality to all their citizens, yet we still are stuck in the Stone Age,” McCarter said. “Plain and simple, the fact that Pennsylvanians can now cross a border and be granted more rights than they currently have in their own state is a problem that needs to be addressed and it needs to be addressed now.”

Sims and McCarter also noted that Pennsylvania lacks basic protections against discrimination against gays in housing, employment and public accommodation.