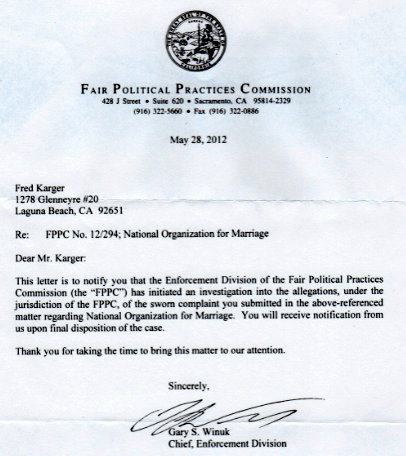 In his sworn complaint of May 17th, Karger alleged that NOM did not report over $340,000 that it raised to pass Proposition 8 four years ago.

California joins the state of Maine which is in its third year of its investigation of NOM, the leading anti-gay marriage organization in the country.

One of the 11 missing contributions was $10,000 from presumptive GOP presidential nominee Mitt Romney’s Alabama PAC. In addition to the Romney money there were 10 more contributions NOM did not report, including: $150,000 from Michael Casey of Jamestown, RI, $100,000 from Sean Fiedler of New York, NY and $25,000 from NOM Board member Craig Cardon of Mesa, AZ, a General Authority in the Church of Jesus Christ of Latter-day Saints (Mormon Church).