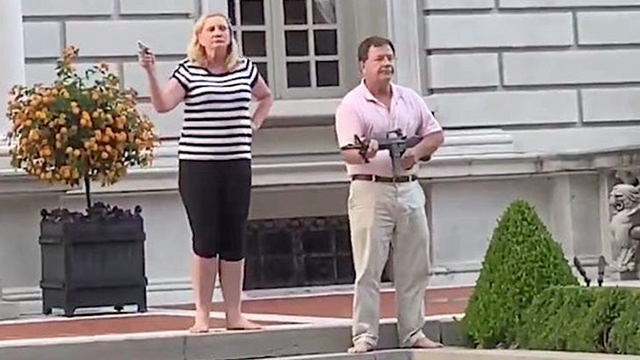 Donald Trump is reportedly getting involved in the case of a wealthy St. Louis couple who threatened Black Lives Matters protesters with guns outside their St. Louis mansion.

The couple, Mark and Patricia McCloskey, are under review for criminal charges, St. Louis Police Chief John Hayden said Tuesday, adding that the police had filed for warrants in the case.

Pictures of the couple waving weapons at protesters on June 28 were shared widely and were seen by many as a symbol of tensions in the US following the death of George Floyd.

On Tuesday, Missouri’s Republican governor, Mike Parson, said Trump “doesn’t like what he sees and the way these people are being treated.”

Parson, as quoted by The Washington Post, said he thought the president and Attorney General William Barr “are going to take a look” at the McCloskey case.

“The president said that he would do everything he could within his powers to help with this situation and he would be taking action to do that,” Parson said.

St. Louis Circuit Attorney Kim Gardner in a statement accused the president and the governor of playing politics with the case.

2/ As I always do. I am reviewing all the available facts and the law and will apply them equally, regardless of the people involved.

4/ It is also incredible that at a time when our nation is dealing with a rapidly spreading deadly virus and our State reported a record number of new infections, they are launching these dog-whistle attacks against me. They should be focused on their jobs, & I’ll focus on mine.