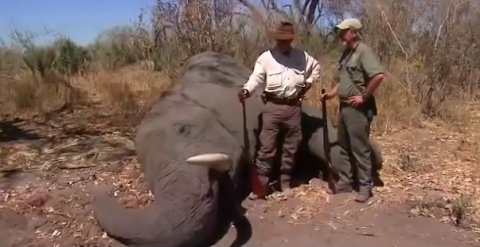 For some reason, NBC Sports Network has been airing an NRA-sponsored hunting show called Under Wild Skies, on which gun-humping .

Above is a highlight reel from this week’s episode of NBC Sports Network’s Under Wild Skies. In it, NRA lobbyist Tony Makris shoots elephants in the face.

He is led into the Botswana wilderness by a hunting guide. They hide behind a bush, about 20 feet away from an unsuspecting elephant. Makris shoots at the elephant twice, but does not kill it. The elephant, terrified, runs away. Makris catches up to the elephant and shoots it again, killing it. Everyone goes home to drink champagne.

Hunting elephants is currently legal in Botswana, but sharp declines in wildlife populations due to trophy hunting have led to an all-out ban that won’t go into effect until 2014.