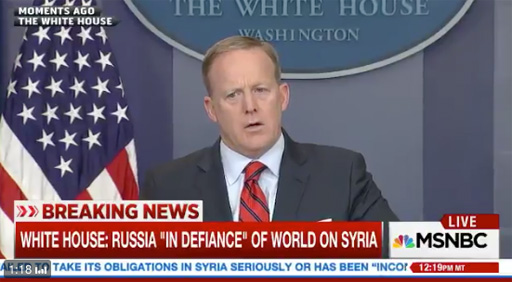 White House Press Secretary Sean Spicer, during a press briefing, told reporters that Syria’s Bashar al-Assad is worse than Hilter, because even Hitler didn’t use chemical weapons on his own people.

Via the New York Daily News:

“We didn’t use chemical weapons in WWII. We had someone as despicable as Hitler who didn’t even sink to using chemical weapons,” Spicer declared as he attacked Russia for backing Bashar Assad’s brutal regime in Syria.

He dug himself deeper when offered a chance to clarify a few minutes later. “When you come to sarin gas, he was not using the gas on his own people the same way that Assad is doing,” he said to shock in the White House briefing room. Hitler infamously used hydrogen cyanide known as Zyklon B at Nazi death camps targeting Jewish and other people.

You know, maybe this isn’t the best job for Sparky Spicer. Maybe some kind of desk job where you don’t put your foot in your mouth in front of millions of people…?

If you have to clarify your comment about Hitler, you probably shouldn’t have said it from the get-go.

.@HallieJackson From the print pool, what appears to be a 4th Hitler clarification from Spicer, which adds a sentence at the end not there previously pic.twitter.com/lxZDJb2rwt— Bradd Jaffy (@BraddJaffy) April 11, 2017

.@brianstelter on Spicer Hitler comments “even by Sean Spicer standards this is a pretty shocking one” https://t.co/wU0LbKq7Tg #hitler— Brooke Baldwin (@BrookeBCNN) April 11, 2017