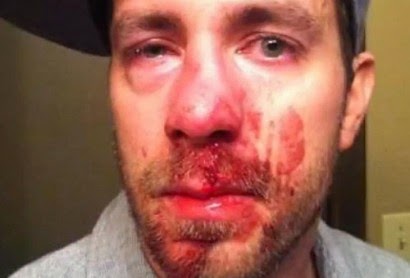 Drew Bratscher, of Sioux Falls, South Dakota, got a face full of what it’s like to be an LGBT ally sometimes when he tried to stand up to a woman using a gay slur.

Bartscher, 27, says he was in crowd with two of his friends outside a local tavern around early Sunday morning when he heard a woman use a derogatory term for gays.

Bartscher, who is straight, says he politely told her she should not say that word.

What happened next blindsided him, reports KELO-TV.

“Then I hear this guy yell at me, ‘What the F did you say to my girlfriend?!?!’ I turned just a little bit and then the next thing I know, my friends are picking me up off the sidewalk, (because) I had gotten punched pretty good,” Bartscher said.

Though Bartscher says he’s a bit embarrassed about his shiner, he’s not ashamed of what he did to get it. He says he posted a photo of his injury almost immediately afterward, with the caption: “Stand up for what you believe in. Love everyone.”

No good deed goes unpunished, kids. I tell you what…

But props to Drew for standing up for the good guys. You get my respect.