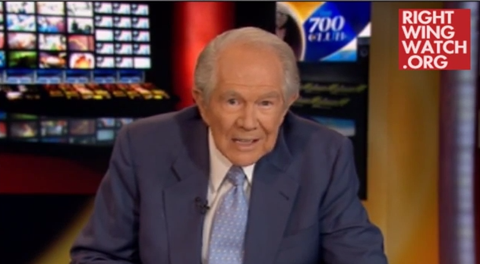 The Air Force recently changed it’s policy requiring recruits to include the phrase “so help me God” when joining the service.

Until the change, only the Air Force carried this requirement.  The Marines, Army and Navy all allowed for the phrase to be optional.

You know, since we have that First Amendment that includes freedom concerning religion and all that.

Well, don’t you know Pat Robertson had to go bonkers over what he calls “one little Jewish radical” who didn’t feel he needed to say “so help me God” to join the Air Force?

Text from the clip below:

There is a left-wing radical named Mikey Weinstein who has got a group about ‘people against religion’ or whatever he calls it, and he has just terrorized the Armed Forces. You think you’re supposed to be tough, you’re supposed to defend us, and you’ve got one little Jewish radical who is scaring the pants off of you.

You want these guys flying airplanes to defend us when you’ve got one little guy terrorizing them? That’s what it amounts to. You know, we swear oaths, ‘So help me God,’ what does it mean? It mean’s that with God’s help — You don’t have to say you believe in God, you just have to say you want some help beside myself with the oath I’m taking. It’s just crazy. What is wrong with the Air Force? How can they fly the bombers to defend us if they cave to one little guy?

When notified of Robertson’s temper tantrum on the subject, Weinstein has this to say:

“Pat Robertson is to human dignity and sanity and integrity and character what dog shit is to a fine French restaurant on the menu.”