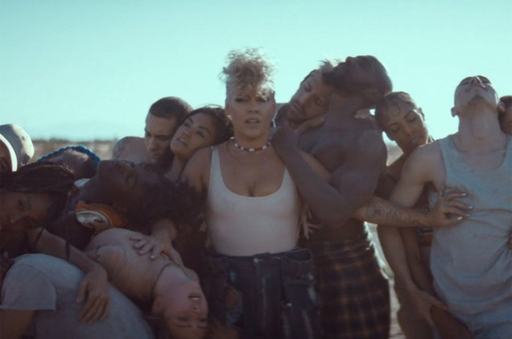 Pink’s striking new music video for “What About Us?” is as stunning as it is timely.

Making a powerful political statement, “What About Us?” puts the focus squarely on the communities whose rights are in danger in Donald Trump’s America: minorities, same-sex couples, and immigrants.

We are problems that want to be solved
We are children that need to be loved
We were willin’, we came when you called
But man, you fooled us, enough is enough
What about us?
What about all the times you said you had the answers?

The video was directed by Georgia Hudson, accompanied by evocative choreography via the Goldenboyz.

And, there’s a gay relationship center stage for much of the video.

And as Pink was releasing the video, MTV announced she will receive the Michael Jackson Video Vanguard Award at the 2017 Video Music Awards on Aug. 27.

I’m a big fan of Pink. I loved the song when she first revealed it a few weeks ago. But she puts the disenfranchisement of many Americans in the spotlight here.

Which makes me love her even more.