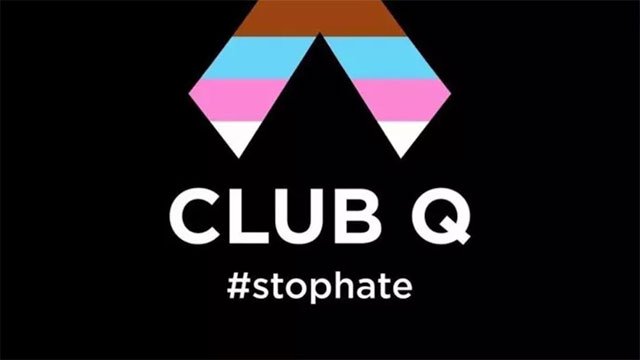 • GoFundMe: An LGBTQ-owned auto shop’s crowdfunding campaign to raise funeral and medical expenses for people harmed in last weekend’s Club Q shooting raised nearly $750,000 in just three days (and you can still donate if you feel so inclined).

• The Hill: Both English and German soccer associations are considering legal action against FIFA after the sporting body banned players from wearing OneLove armbands promoting diversity and inclusion at the World Cup in Qatar.

• KDVR: Cell phone video from a Frontier Airlines passenger showed club shooting suspect Anderson Aldrich and Aldrich’s mother, Laura Voepel, in a heated confrontation with fellow passengers on July 31. The video was taken by Maria Martinez after the Aurora woman said Aldrich referred to her by a racist slur used against Hispanics.

Cell phone video from a plane passenger shows the Club Q shooting suspect and his mother in a heated confrontation with fellow passengers. https://t.co/kIuL65IxoZ

• HuffPost: President Jair Bolsonaro of Brazil is contesting his defeat in the October election (because, of course…) and calling on the electoral authority to annul votes cast on more than half of electronic voting machines used.

• Deadline: Kelsey Grammer is opening up about David Hyde Pierce’s decision not to return to the upcoming Frasier revival series on Paramount+. “David basically decided he wasn’t really interested in repeating the performance of Niles,” says Grammer.

• Business Insider: Days after he said there would be no more firings, Elon Musk terminated several dozen Twitter employees overnight on Wednesday, most of whom were engineers.

• Raw Story: Donald Trump Jr. defended World Cup host Qatar’s civil rights violations in a Thanksgiving Day rant. Homosexuality is illegal in Qatar, where same-sex acts are punishable by up to three years in prison, and players and fans have been prohibited from wearing arm bands declaring their support of LGBTQ people.

It’s worth noting that Junior once lavished praise on homocon Richard Grenell for a supposed Trump initiative to pressure countries to decriminalize homosexuality.

Your dad is ground zero for the sexualization of children. In addition to being pals with and a client of Jeffrey Epstein, he owned the Miss Teen USA pageant. Sit down, Junior. https://t.co/pBCf3OJ9R1