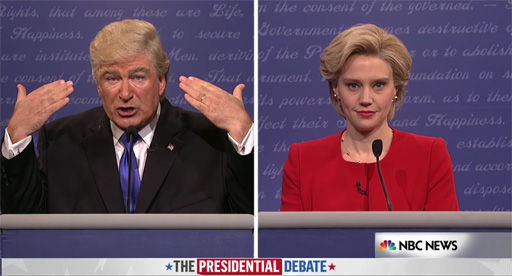 The 42nd season premiere of Saturday Night Live did not disappoint as newly-annointed Emmy Award winner Kate McKinnon came on strong with her incarnation of “Hillary Clinton,” and Alec Baldwin delivered a drop-dead “Donald Trump,” in SNL satirical version of this week’s first presidential debate.

Mic has the recap:

“We should be talking about the important issues like Rosie O’Donnell and how she’s a fat loser,” Baldwin-as-Trump says after Clinton cedes her response time to him in the hopes of such a remark.

Jabbing at Trump’s complaint that he experienced microphone problems during Monday’s debate, Baldwin’s character immediately turns the blame on Clinton.

“She broke it with Obama; she and Obama stole my microphone and took it to Kenya and they broke it,” he says.

The sketch also features a sparring match almost identical to the one that played out on the debate stage on Monday, with McKinnon mimicking Clinton’s speculation about why Trump has refused to release his tax returns while Trump interrupts her sporadically.

“He hasn’t released his tax returns which means he’s either not that rich,” (“wrong”) “not that charitable” (“wrong”) “or he’s never paid taxes in his life” (“warmer”).

When Michael Che as Lester Holt asks “Clinton” why she is crying towards the end of the sketch, McKinnon’s perfectly timed answer pretty much sums it up:

“This is going so well,” she says, referring to Trump’s unprompted reference to Rosie O’Donnell. “It’s going exactly how I’d always dreamed.”