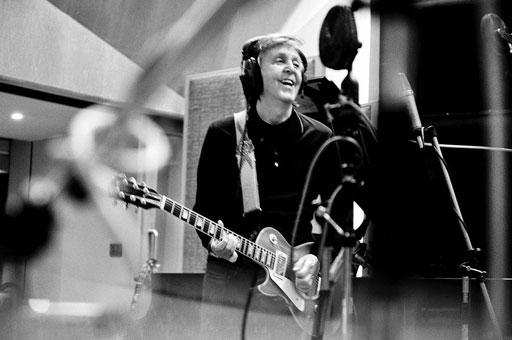 The 76-year-old shares much in a frank and direct manner throughout the interview.

One passage that’s garnered a lot of attention was this little story about how ‘close’ he and John Lennon were as young band mates:

There would be about five of them: McCartney, Lennon, and maybe three of Lennon’s friends. As they each concentrated on their mission, anyone in the group was encouraged to shout out a name that would offer relevant inspiration.

“We were just, ‘Brigitte Bardot!’ ‘Whoo!'” McCartney says, “and then everyone would thrash a bit more.”

At least until one of them—the one you would perhaps expect—opted for disruption over stimulation.

“I think it was John sort of said, ‘Winston Churchill!'” McCartney remembers, and acts out the aghast, stymied reactions.

I ask whether this ritual took place often.

“I think it was a one-off,” McCartney replies. “Or maybe it was like a two-off. It wasn’t a big thing. But, you know, it was just the kind of thing you didn’t think much of. It was just a group. Yeah, it’s quite raunchy when you think about it. There’s so many things like that from when you’re a kid that you look back on and you’re, ‘Did we do that?’ But it was good harmless fun. It didn’t hurt anyone. Not even Brigitte Bardot.”

There’s also a quick tale of 17-year-old John Lennon losing his virginity as his band mates listened. Ah, the boys…

It’s a really great, in-depth read about a true music legend. Click over to GQ here to read the full article.