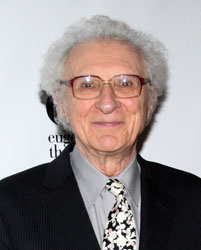 From Playbill: One of the most common things in the world happened on Oct. 1 in Tappan, NY. “Sunrise, Sunset” was performed at a wedding.

Only this time it was a little different. The song — which has accompanied thousands of nuptials since its debut on Sept. 22, 1964, in Fiddler on the Roof — graced the wedding celebration of two men, entertainer Richard Skipper and landscape architect Daniel Sherman, and the melancholy-happy tune’s story of a “little girl I carried” and a “little boy at play,” now told of two boys.

“I’ve been doing same-sex weddings since New York law permitted it in July,” said Rev. Joshua Ellis, whose new career as a New York-based Interspiritual minister was preceded by many years as a theatrical press agent in New York City. “And something was missing. Nobody was singing ‘Sunrise, Sunset.’ It’s sung all the time in weddings of mixed couples. I guessed it was because they talk about a little boy and a little girl. So I contacted [lyricist] Sheldon Harnick.”

Ellis continued, “Within a few days, he wrote a note back. He’d contacted Richard Ticktin, who was best friend of Jerry Bock and his representative. Attached to that email were revised lyrics of the song.” Ellis then gently asked Harnick if he could also write a set of lyrics for a female couple. Those arrived soon after.

Here are the newly revised lyrics:

What words of wisdom can I give them?
How can I help to ease their way?
Now they must learn from one another
Day by day.

They look so natural together.
Just like two newlyweds should be.
Is there a canopy in store for me?

Sunrise, sunset,
[Continues as above]