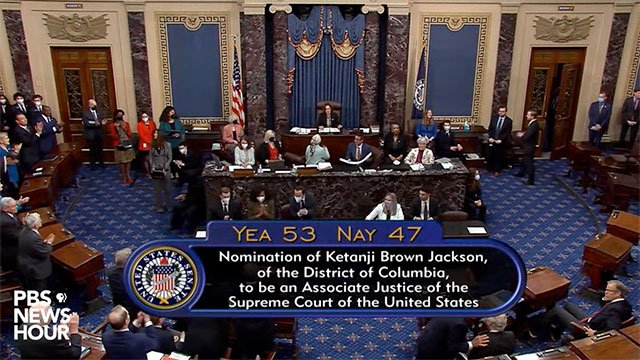 The Senate confirmed Judge Ketanji Brown Jackson to the US Supreme Court on Thursday by a vote of 53-47. The historic confirmation will make Jackson the first Black woman to serve on the high court.

All Democrats voted for Jackson as well as three Republicans – Sens. Susan Collins of Maine, Lisa Murkowski of Alaska, and Mitt Romney of Utah.

Jackson will be only the third Black justice in the court’s 233-year history.

Once she is seated on the court, it will be the first time two Black American justices will serve on the bench at the same time.

Additionally, it will be the first time four women serve simultaneously.

Jackson will be sworn in after Associate Justice Stephen Breyer retires this summer.

President Biden and Judge Ketanji Brown Jackson react while watching the Senate vote on her nomination to the Supreme Court from the Roosevelt Room at the White House.

Jackson will become first Black woman on the Supreme Court.https://t.co/aZ27lbCV4P

Some Republicans walk out during the applause. Mitt Romney stays and continues to clap pic.twitter.com/b9z8huQQIY