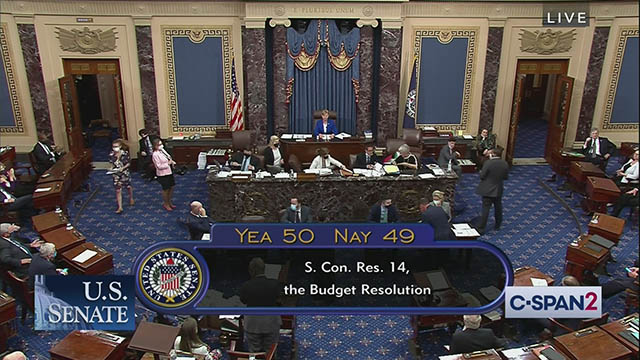 Wow, that was quicker than I expected. Just hours after the Senate passed a bipartisan bill to improve the nation’s infrastructure, Democrats approved a $3.5 trillion budget that could help address climate change, expand Medicare, provide for pre-kindergarten and more.

The 50-49 vote came early Wednesday morning, after lawmakers sparred in a marathon debate over the proposed sizable increase in spending and its potential implications for the federal deficit.

It paves the way for universal prekindergarten and new family leave benefits, and it aims to help immigrants obtain legal permanent residency status.

The full legislation will now have to be hashed out.

Democrats plan to pay for the legislation by undoing tax rate cuts for wealthy families and profitable corporations that were passed during the Trump administration. But they can’t afford to lose a single vote and Sen. Joe Manchin (D-WV) is already expressing concern about the price tag.

My statement raising concerns about the consequences of passing a $3.5 trillion budget: pic.twitter.com/gGsEXcVTxd

Democrats in the Progressive House caucus have drawn a line in the sand saying they won’t pass the bipartisan bill without this $3.5 trillion package.