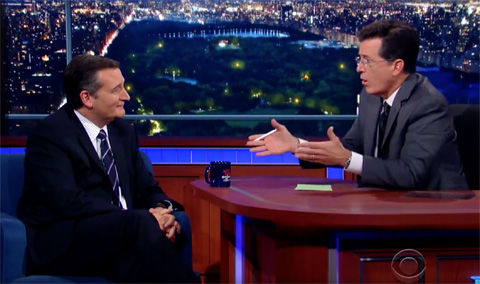 Sen. Ted Cruz dropped by The Late Show with Stephen Colbert to discuss the idea of compromise in politics (a la Reagan) and of course, same-sex marriage.

Cruz got a somewhat chilly response from the audience, which I’m sure Cruz expected to some degree given Colbert’s audience. But when it came to talking on marriage equality, he actually garnered some boos.

When a few audience members began to boo the White House hopeful, Colbert asked for their respect and gave Cruz the last word.

“The 10th Amendment states that if the Constitution doesn’t mention it, it’s a question for the states,” said Cruz, a Harvard law graduate who once clerked for Supreme Court Chief Justice William Rehnquist.

“I don’t think we should entrust governing our society to five unelected lawyers in Washington.”

On his last line, Cruz received some applause, which largely eluded him throughout the interview. “If you want to win an issue, go to the ballot box and win at the ballot box,” he said. “That’s the way the Constitution was designed.”

You’ll note that Cruz makes a point of lessening the level of respect that should be afforded the Supreme Court Justices by always referring to them as “unelected lawyers,” not “judges” or “justices.”