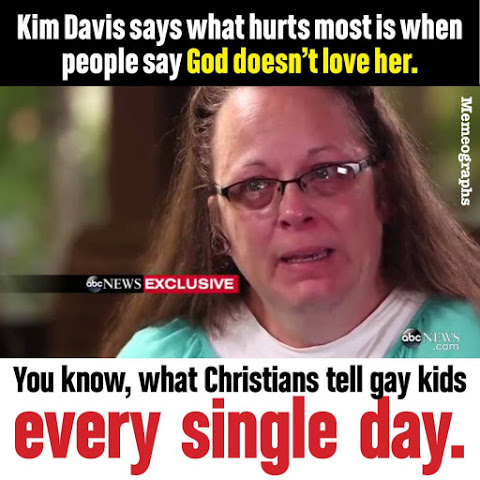 Rogue Kentucky Clerk Kim Davis gave an exclusive interview with Good Morning America where she denounced the “hate” that she feels has been unfairly directed at her for refusing to follow the law and issue marriage licenses to same-sex couples.

“I’ve been called things and names that I didn’t even say when I was in the world. Those names don’t hurt me,” Davis said. “What probably hurt me the worst is when someone tells me that my God does not love me or that my God is not happy with me, that I am a hypocrite of a Christian.”

Wow, Kim. That must really hurt your feelings. Kind of like how LGBT kids feel when they’re told by “Christians” they will burn in hell.

Davis also shares that she has gay friends. I have some advice for those gay friends – Get better friends.