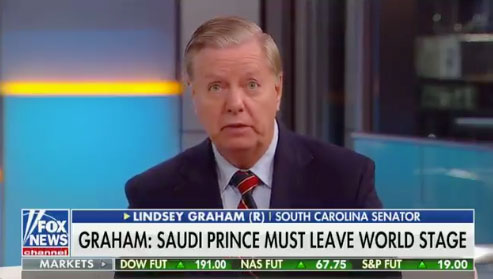 As the scandal revolving around the disappearance and death of journalist Jamal Khashoggi continues to grow, some former supporters of Saudi Arabia are feeling like they’ve been played.

During an appearance on Fox & Friends this morning, Republican Sen. Lindsey Graham promised never to work with Saudi Arabia again as long as Crown Prince Mohammed bin Salman (often referred to as MBS) is in charge of the country.

Graham made a point to say how often he’s defended the country on the floor of the U.S. Senate.

Graham also said he intends to “sanction the hell” out of Saudi Arabia.

“This guy has got to go. Saudi Arabia, if you’re listening, there are a lot of good people you can choose, but MBS has tainted your country and tainted himself,” Graham told the TV audience.

“I can never do business with Saudi Arabia again until we get this behind us,” Graham announced. “That means I’m not going back to Saudi Arabia as long as this guy is in charge.”

This is all while Secretary of State Mike Pompeo is currently meeting with Saudi leaders in an effort to get clear on what actually happened to Khashoggi.

On @foxandfriends, @LindseyGrahamSC describes Saudi Crown Prince Mohammed bin Salman as “a wrecking ball. He had [Khashoggi] murdered…the MBS figure is toxic. He can never be a world leader…This guy’s got to go. Saudi Arabia if you’re listening, MBS has tainted your country.” pic.twitter.com/dGRDRVsztc

Meanwhile, after Donald Trump initially told the press that Saudi Arabia denied any involvement in Khashoggi’s death (which poses some questions about the Trumpster ‘believing’ who he wants to believe), now he’s putting some distance between himself and the Saudis tweeting he has “no financial interests” with the country.

For the record, I have no financial interests in Saudi Arabia (or Russia, for that matter). Any suggestion that I have is just more FAKE NEWS (of which there is plenty)!

But, then there’s this…

Here’s the video of Trump at his July 2015 rally boasting he makes “a lot of money” to the tune of “hundreds of millions” of dollars selling things to the Saudis and Saudi Arabia. pic.twitter.com/QrjrnF4Hen