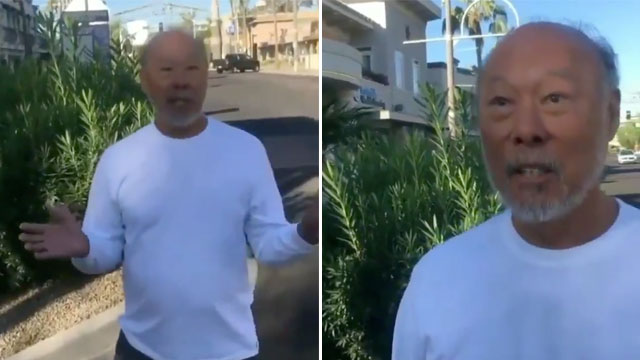 TMZ reports that an Arizona man, identified as Paul Ng, told a Black man shooting an episode for his podcast on a public street that he was in a “no n*gg*r zone.”

Andre Abram was recording an episode for his podcast in Old Town Scottsdale, AZ last Friday with his cameraman, who’s also African-American. As they were recording, they noticed Ng scoping them out.

Abram’s camera was rolling when Ng strolled over and asked the two men what they were doing.

Ng explained that “we’ve had problems here,” before going on to admit that he is, in fact, a racist. Abram calmly explained that they were not, in fact, in a “no n*ggr zone,” but Ng continued to ask Abram questions about where he’s from and why he’s there.

Abram didn’t escalate the situation, but eventually police tracked Ng down at his home where he was cited for disorderly conduct.

It turns out Ng was a Realtor with Russ Lyon Sotheby’s International Realty – “was” because the real estate office fired Ng upon learning of his abhorrent behavior. The broker there also recommended Ng’s state license be revoked.

This is an anti-Black racist Asian man named Paul Ng of Scottsdale AZ..He was fired from his job after he tried to provoke an altercation with a Black man.

This is the “minority coalition” Black people fought so hard for pic.twitter.com/wkZd7Bz5a7