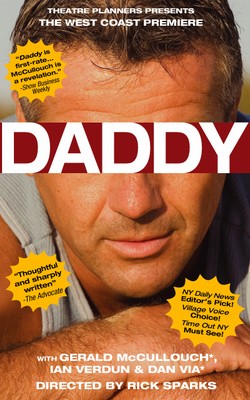 Last night, I saw the play DADDY at the Hudson Theater on Santa Monica Blvd in LA.

I didn’t know anything about the play going in. I had worked with one of the lead actors several years ago in an off-Broadway production, and another cast member from that production – the brilliantly talented Jamison Stern – was in town to see the play, so I was up for a reunion and I always love being in a theater seeing good theater.

And that’s exactly what I got. The play, written by Dan Via, who also stars as one of the leading roles, is terrific and surprising. The play doesn’t exactly take you where you think you’re headed, and that’s all I’ll say about that. I was happily surprised at the issues explored – best friends, boy friends, family relations – and how skillfully they were interwoven without being heavy handed.

Gerald McCullouch, from CSI and the recent indie hit film Bear City, brings sensitivity, warmth and confidence to the role of Colin who is soon challenged by a twist of fate as the events of the play unfold. He and Via, who play best friends, have chemistry that easily demonstrates the comfort of long term friendship.

Ian Verdun, who plays the younger man Tee, is alternately exuberant and disturbing in a tight, edgy performance.

One thing that can often be an issue with small theater productions is presenting the material without a sense of being cramped in a small stage space. Rick Sparks directs the play with a terrific sense of pace, and uses the set – designed by Adam Flemming – to create multiple locations effortlessly. Kudos also to Francois-Pierre Couture for a lighting design that effortlessly helps move the audience from one location to another with a striking sense of intimacy.

Seriously, go see it this weekend.