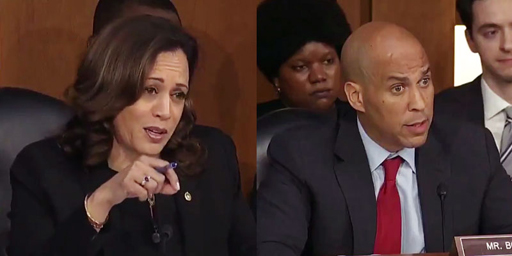 Long days of confirmation hearings by the Senate judiciary committee questioning Donald Trump’s latest nominee for the U.S. Supreme Court, Brett Kavanaugh, have yielded no answers on where the candidate stands on marriage equality.

Sen. Kamala Harris (D-CA), a former Attorney General of California, attempted to get a straight answer to no avail.

“My question is very specific,” she stated. “Can you comment on your personal opinion on whether Obergefell was correctly decided. It’s a yes or no. Please.”

The problem is that case wasn’t about same-sex marriage per se, but about LGBT discrimination.

“That is the precedent of the Supreme Court agreed with by…” Kavanaugh began, a response he’s used throughout the proceedings to avoid a direct answer.

Harris wasn’t having it. “Sir, I’m asking your opinion,” she made clear. “You’re the nominee right now so it is probative of your ability to serve on the highest court in our land.”

“So I’m asking you a very specific question – either you’re willing to answer or not,” framing the back and forth. “And if you’re not willing to answer it, we can move on. Do you believe Obergefell was correctly decided?”

“Each of the justices have declined as a matter of judicial independence,” Kavanaugh demurred.

“So you will not answer that question?” Harris declared and moved on to another subject.

I asked Brett Kavanaugh a very specific question: does he believe the case that made marriage equality the law of the land was correctly decided?

He refused to answer. pic.twitter.com/FO6kCLmk2f

Sen. Cory Booker (D-NJ) tried in his own way to get clarity on the judge’s position on the legality of same-sex marriage.

“Would it be wrong to fire a gay person?” Booker asked Kavanuagh.

“In my workplace, I hire people because of their talents and abilities,” Kavanaugh said, steering away from any legal perspective.

Kavanaugh declined to answer that question directly citing ongoing litigation that he might have to rule on.

Growing frustrated, Booker stated the concern directly to the nominee: “There are a lot of folks who have concerns that if you get on the court, folks who are married right now really have a fear that they will not be able to continue those marital bonds.

“We still have a country where, if you post your Facebook pictures up of your marriage to someone of the same sex, we still have a majority of the states where if that employer of yours finds out that you’ve got a gay marriage and that you’re gay, in the majority of America states, you can fire somebody because they’re gay,” stated Booker.

Only 20 states plus Washington, D.C. protect gay, lesbian or bisexual workers in public or private employ.

“I guess you’re not willing to tell me whether you personally, morally now, think that that’s right or wrong,” Booker concluded.

Watch Sen. Booker go round and round with Kavanaugh below.

Kavanaugh refused to respond to @SenBooker when asked if it should be legal to fire someone just because they are LGBTQ. pic.twitter.com/j4un4GP36y

The CEO of GLAAD, Sarah Kate Ellis, tweeted this statement deriding Kavanaugh’s vague, non-answers to Harris and Booker on these questions of vital concern to LGBTQ Americans.

Judge Kavanaugh refuses to answer simple questions on the dignity of LGBTQ Americans and is unfit to serve on the Supreme Court.

With the world watching, Kavanaugh refused to tell LGBTQ Americans that we deserve equal protections under the law and Congress should take action before appointing him to a lifetime position where he will no doubt work to undermine our basic rights to liberty and justice.