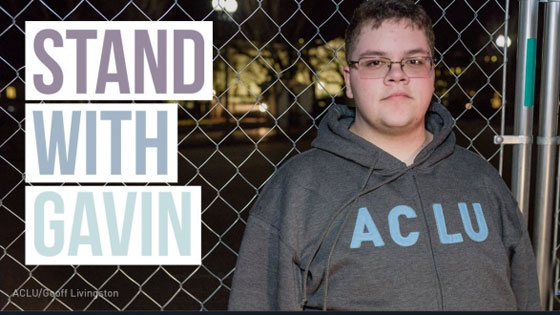 Last month, Gavin Grimm, a transgender man who graduated from Gloucester High School in Virginia two years ago, won his long legal battle with his former high school over the right for trans students to use the public bathroom that aligns with their gender identity.

But this week, the Gloucester County School Board decided to appeal the federal court ruling in Grimm’s favor.

And so, Gavin Grimm will have to fight his trans ‘bathroom case’ yet again.

Yes, he’s graduated and moved on, but the pro-trans ruling is so important to trans people that you can bet the 20-year-old activist will continue the good fight.

His case dates all the way back to 2014, when he began to transition in his sophomore year of high school.

Grimm began using a men’s restroom and told school administrators what was going on in his life.

But in December of that year, the school board instituted a policy that prohibited Grimm from using the boys’ room.

Grimm filed his initial law suit in 2015 with the aid of the ACLU. Since that time, he has been locked in this never-ending legal.

He finally took his case to the U.S. Supreme Court two years ago, but the high court sent the case back to the 4th Circuit Court of Appeals after the Trump administration reversed Obama-era protections for transgender students in American public schools under Title IX.