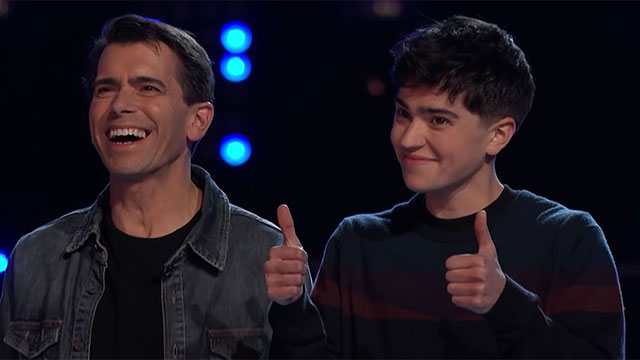 Father and son Jim and Sasha Allen are gaining fans by the thousands each week on NBC’s The Voice. Whether they win or not, they’ve already made history as Sasha is the first openly transgender singer in 21 seasons  to make it into the Top 10.

Jim grew up playing in various folk and bluegrass bands and went on to become a music teacher and then a father. He taught his son how to play guitar at 6 years old and soon after, Sasha was joining Jim on stage at his gigs.

Sasha didn’t have an easy childhood, but music was always the constant that kept him going. At the start of high school, Sasha came out as transgender. Those were difficult years, but Sasha knew with the support of his family and music he could handle anything.

Jim and Sasha, both songwriters, have recently become an official duo and have been playing at open mics and other local venues.

The duo knocked it out of the park with their blind audition where they turned the chairs of both Kelly Clarkson and Ariana Grande.

Kelly hit the button first, later saying she just couldn’t let them get away. Check Sasha’s adorable reaction at the 1:32 mark when Ariana gets in the game.

The guys continued to kill it in battle rounds competing against Sophia Bromberg:

The talented duo won their knockout round against Manny Keith performing  Edward Sharpe and the Magnetic Zeros’ “Home” to keep on moving ahead:

And this week, America saved Jim and Sasha with the “Instant Save” sending them into the Top 10.

Make sure to tune in and follow the guys as they continue their journey on The Voice next week.