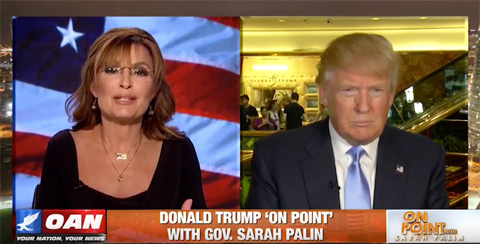 So, the Sarah Palin “interview” of GOP White House hopeful Donald Trump was more snore than sensation. She lobbed softball questions, and The Donald seemed bored.

But in classic Palin, the former half-term governor groused over Trump being asked his favorite Bible verse this week:

So you get hit with these gotchas, like most conservatives do. For instance, asking what’s your favorite Bible verse. And I listen to that going, what? Do they ask Hillary that?

Funny you should ask, Sarah.

Indeed they do! On August 27, 2007, in a nationally televised debate, Tim Russert asked every Democrat on the stage to share their favorite Bible verse:

RUSSERT: Before we go, there’s been a lot of discussion about the Democrats and the issue of faith and values. I want to ask you a simple question.

Senator Obama, what is your favorite Bible verse?

OBAMA: Well, I think it would have to be the Sermon on the Mount, because it expresses a basic principle that I think we’ve lost over the last six years.

John talked about what we’ve lost. Part of what we’ve lost is a sense of empathy towards each other. We have been governed in fear and division, and you know, we talk about the federal deficit, but we don’t talk enough about the empathy deficit, a sense that I stand in somebody else’s shoes, I see through their eyes. People who are struggling trying to figure out how to pay the gas bill, or try to send their kids to college. We are not thinking about them at the federal level. That’s the reason I’m running for president, because I want to restore that.

RUSSERT: I want to give everyone a chance in this. You just take 10 seconds.

CLINTON: The Golden Rule: Do unto others as you would have them do unto you. I think it’s a good rule for politics, too.

The other Democratic candidates were asked also, but you get the picture.

Of course, the fact that Palin didn’t know this is no surprise.