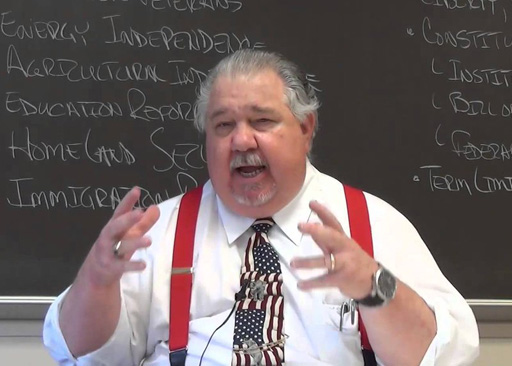 Donald Trump’s nominee for the Department of Agriculture’s chief scientist, Sam Clovis, has withdrawn his name from consideration after it became apparent he had no “hard” science background.

Clovis, who possesses a bachelor’s degree in political science, an MBA degree and a doctorate in public administration, repeatedly acknowledged his lack of background in the hard sciences when responding to Stabenow.

“Please list all graduate level courses you have taken in natural science,” the second of 10 questions requested.

“Please list all membership and leadership roles you have held within any agricultural scientific, agricultural education, or agricultural economic organizations,” the third question read.

“Please describe any awards, designations, or academic recognition you have received specifically related to agricultural science,” the fourth question read.

The WaPo notes that the position has traditionally been held by individuals with advanced degrees in science or medicine.

In the past, appointees have been chosen “from among distinguished scientists with specialized training or significant experience in agricultural research, education, and economics.”

You’ll recall during the 2016 campaign that Donald Trump boasted he would have “all the best people” in his administration. Like, talk radio hosts for science posts…?

Clovis has also become embroiled in the latest details of the Russian collusion investigation as it’s become clear he was aware of efforts by foreign policy adviser George Papadopoulos to make a meeting between Team Trump and Russian agents happen. He is said to be a “cooperating witness” with the investigation.

Virulently anti-LGBT, Clovis has stated in the past that legalizing same-sex marriage would lead to the legalization of pedophilia.

After Monday’s developments, I’m pretty sure WH wasn’t too keen on this guy testifying before Senate under oath. https://t.co/XNxeD4mOxg

Sam Clovis has withdrawn his nomination to be the head of the USDA.

Cooperating witnesses tend to do that kinda thing.