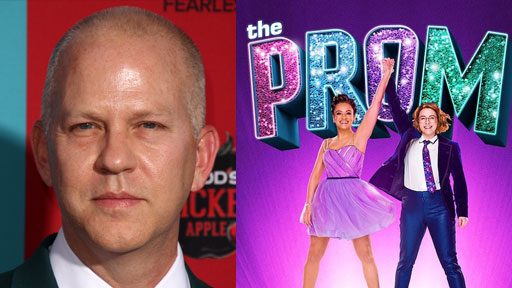 Murphy announced on his Instagram Wednesday that he will turn the new Broadway musical, The Prom, into a Netflix “movie event.”

“THE PROM is one of the most uplifting, heartfelt and special musicals I have ever seen on Broadway,” wrote Murphy. “It’s truly an original that celebrates the underdog and says in a loving spectacular way that LGBTQ rights are human rights.”

Citing a “special connection” to the piece due to the location of the musical, Indiana, which happens to be where Murphy hails from, he told his followers, “I’m thrilled to announce I’m turning it into a MOVIE EVENT for Netflix.”

View this post on Instagram
THE PROM is one of the most uplifting, heartfelt and special musicals I have ever seen on Broadway. It’s truly an original that celebrates the underdog and says in a loving spectacular way that LGBTQ rights are human rights. I feel a special connection to it because it’s set in Indiana, and that’s where I grew up, too. I’m thrilled to announce I’m turning it into a MOVIE EVENT for Netflix, and I’m bringing producers @billdamaschke and @dori.berinstein and the amazing creative team with me — Tony Award winner Casey Nicholaw, Tony Award winner Bob Martin, Tony award nominee @sklarbar73 and Tony Award nominee @Chadbeg. See it first at the Longacre Theatre. It has a musical score that will leave you singing for days, a hilarious and moving book and some of the most showstopping direction, choreography and performances I’ve ever seen on Broadway. @theprommusical
A post shared by Ryan Murphy (@mrrpmurphy) on Apr 9, 2019 at 5:32pm PDT

In adapting the material for TV, the 6-time Emmy Award winner shared that the Broadway creative team – including Tony Award winning director/choreographer Casey Nickolaw – will come along for the ride, as well as the stage producers.

The show, which follows the story of a high school student in a small Indiana town who is banned from bringing her girlfriend to the prom, opened at the Longacre Theater on Broadway last fall to rave reviews.

“So full of happiness you think your heart is about to burst!” – Variety

You may recall the splash the show made when the cast performed the number “Build A Prom” on the Macy’s Thanksgiving Day Parade in November.

I’m pretty sure that was the first same-sex kiss to be televised on the long-running parade.