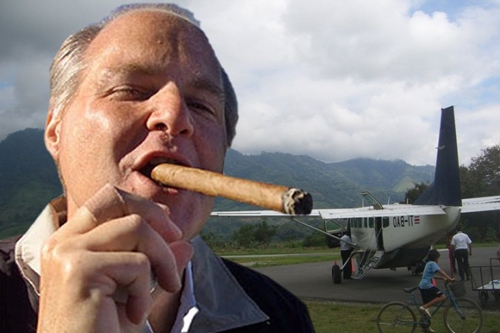 Today, on his radio show, Rush Limbaugh made fun of First Lady Michelle Obama as over-weight while he perused a picture from last night’s state dinner with French President Francois Hollande.

“There is Michelle Obama and the $12,000 gown by Carolina Herrera, and the French president Hollande is in the middle, and there’s Obama. You’ll notice that this dress is bigger than the president of France.

“Here, let me make one more adjustment here and I’ll show you this again. Take a look at that picture. The little guy in the middle is the socialist dictator — well, not dictator. He’s the socialist president of France.

“On the left, that’s not Oprah. Don’t confuse that. That’s Michelle Obama. I saw a picture of this from the rear. That’s why I thought it was Oprah. I did.”

Limbaugh and other right wing conservative nuts are very, very perturbed that the Obamas hosted a formal state dinner while the president campaigns against income inequality.

Now – those inconvenient facts that right wingers don’t like to acknowledge:

Last night’s event was only the 6th state dinner during the Obama’s time in the White House.

The first President Bush held more than 20 state dinners in his one term in office.