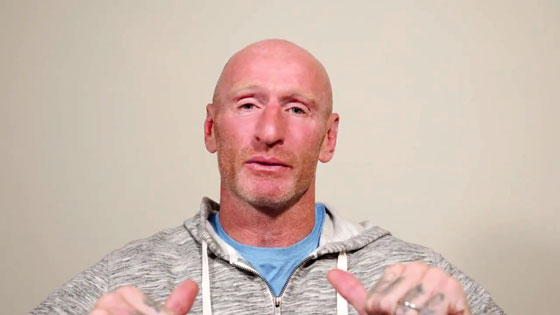 In a candid video message shared via social media, rugby legend Gareth Thomas (above) has revealed that he is HIV-positive.

Thomas, who came out publicly as gay in 2009 and retired from the sport in 2011, made the announcement Saturday in a video posted on Twitter. As part of his message, he shared he was making the announcement now because he was ‘being blackmailed’ over his status.

“I want to share my secret with you,” the former Wales rugby star shares in the video message. “Why? Because it’s mine to tell you. Not the evils that make my life hell by threatening to tell you before I do. And because I believe in you and I trust you.”

After pausing for a moment, the 45-year-old athlete continued, “I’m living with HIV.”

“Now you have that information, that makes me extremely vulnerable, but it does not make me weak,” he added. “Now, even though I’ve been forced to tell you this, I choose to fight to educate and break the stigma around this subject. And that begins today.”

“Everyone lives in fear of people’s reactions and opinions to something about them, but that doesn’t mean we should have to hide,” concluded the rugby icon. “But to do this I really, really need your support.”

The former Celebrity Big Brother star told the Sunday Mirror that even though he’d been living with his secret for years, he made the decision to come out as HIV+ now because “I was being blackmailed, and in my mind you only get blackmailed for something really bad, which compounded the feeling of shame.”

Thomas didn’t name the outlet threatening to out his status.

Explaining that living with the secret has worn heavily on him, he shared his concerns that “people would judge me and treat me like a leper because of a lack of knowledge.”

“I was in a dark place, feeling suicidal,” he added. “I  thought about driving off a cliff.”

Thomas gives credit to a strong support system around him, including his husband who he married in 2016 after discovering he was HIV-positive.

After years of taking antiretroviral medications, he says his viral load is undetectable, making the possibility of passing on the virus to others practically zero.

“Many people live in fear and shame of having HIV, but I refuse to be one of them now,” Thomas says. “We need to break the stigma once and for all. I’m speaking out because I want to help others and make a difference.”

Today, Thomas works as an ITV pundit for the Rugby World Cup, and is planning on competing today in the Wales Ironman event. “I’m fitter now than when I played rugby and I didn’t have HIV then,” he says. “I’m not just all right, I’m better than all right.”

In November 2018, Thomas was the victim of a gay-bashing incident in his hometown. In lieu of pressing charges, the sports icon instead asked for an apology.

The reaction on social media has been overwhelmingly positive, including a message from Prince William via the Kensington Palace Twitter account.

Courageous as ever – legend on the pitch and legend off it. You have our support Gareth. W https://t.co/WXGof2N3j8

So much respect for your strength and courage. Wishing you all the best @gareththomas14. https://t.co/IckMwggu0N

His example offers hope and resolve to others. Solidarity, @gareththomas14. https://t.co/kpJPbWgBoB