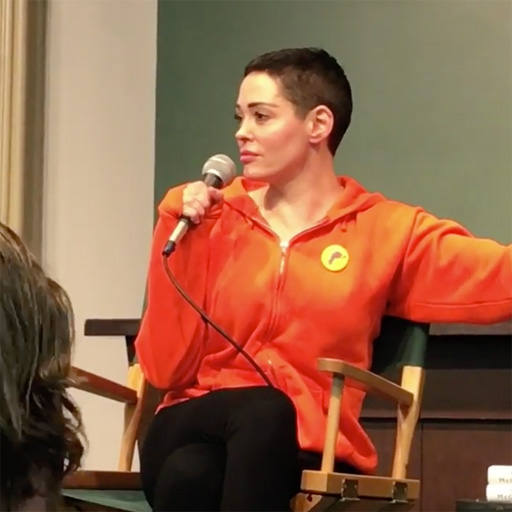 Rose McGowan, who has been central to the #MeToo movement for coming out about her experiences with Harvey Weinstein, recently made an appearance at a New York City Barnes & Noble promoting her book, Brave.

The book addresses the women’s issues she’s been a part of for several years, and along the way congratulates herself for being, well, “brave.”

But the bookstore appearance took a left turn when a transgender woman stood up asking McGowen to address comments she made on RuPaul’s podcast, What’s the Tee? with Michelle Visage.

I have a suggestion. Talk about what you said on RuPaul. Trans women are dying and you said that we, as trans women, are not like regular women. We get raped more often. We go through domestic violence more often. There was a trans woman killed here a few blocks [away]. I have been followed home —.

From there the situation went from zero to 60 in one second. McGowen flipped out cursing at the trans woman, yelling, “What have you done for women?”

“Don’t label me, sister. Don’t put your labels on me. Don’t you fucking do that. Do not put your labels on me. I don’t come from your planet. Leave me alone. I do not subscribe to your rules. I do not subscribe to your language. You will not put labels on me or anybody. Step the fuck back. What I do for the fucking world and you should be fucking grateful. Shut the fuck up. Get off my back. What have you done? I know what I’ve done, God damn it.”

And it kind of went downhill from there.

McGowan has now cancelled her book tour and attacked her own team for not protecting her.

I am canceling upcoming public appearances because I have given enough. I have given beauty, in return I was VERBALLY ASSAULTED for two full minutes @BNBuzz by an actor paid to verbally assault a woman who has been terrorized by your system. And no ONE in that room did anything

And everyone from my publicists, t assistants, managers and every person sitting in their chairs frozen by their weakness, a weakness called COMPLICITY. The truth is you all failed me. Again. And again. And again.

I would like an apology from the manager of the Union Square @BNUnionSquareNY and all security people, and the audience, who did nothing and let the paid verbal assault of an assaulted woman happen. Cool?

You can watch the exchange below. There are four clips in the post, but 2 and 3 seem to repeat. I’d heard about the incident but you have to see it to believe it.