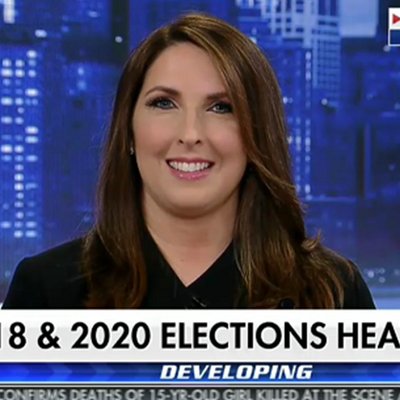 Republican National Committee chair Ronna Romney McDaniel stepped in it this morning when she took to Twitter to announce that “Democrats hate Trump more than they love America.”

It took less than two seconds for folks to point out that McDaniel must love the Trumpster more than she loves her own family since she was reportedly asked by the White House to drop her family name before becoming RNC chair since it is a constant reminder that McDaniel’s uncle is Trump foe, Mitt Romney.

Democrats hate our President more than they love our country.

In truth, the reason why Trump has encountered the resistance he has is because Democrats love the country more than they love Trump.

The Twitterverse took note of the chairwoman’s dumbassery:

I’m a Democrat, a veteran, I love our country, and I loathe president 45.

This recklessly divisive and remarkably demagogic tweet might lead to the judgment that @GOPChairwoman loves her president more than she loves our country. https://t.co/N5TwspNMsO

Dear @GOPChairwoman – I fixed it for you pic.twitter.com/3t913PeHVF

Ronna Romney McDaniel cares more about her job than her actual name.

You literally changed your name to appease this dope. Sit down.

Ronna McDaniel loves our President more than she loves her own name, which was Ronna ROMNEY McDaniel until she stopped using Romney in public at Trump’s request when he made her RNC chair. https://t.co/puhcSrXP1h https://t.co/fJcuVmHy1v

Democrats hate our president because we love our country.

I mean, do you honestly think this is helpful? Don’t you think one can criticize the President & still be loyal to the country? I’m flabbergasted someone in your position would use their platform to divide this way.

Especially after the hate they spewed on Obama.