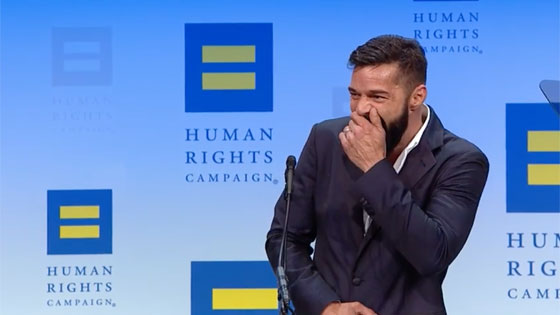 The announcement came as Martin was honored at the Human Rights Campaign’s National Dinner in Washington, D.C.

“My family is here,” said Martin from the stage. “Jwan, I don’t see you but my husband Jwan, I love you.”

“My beautiful twins Matteo and Valentino – I love you with all my heart, you’re my strength,” he continued as he pointed to his two 10-year-old sons. “You inspire me every day, you motivate me to keep doing what I’m doing and you guys are amazing. I love you.”

After explaining that his youngest, Lucia, who was born at the end of last year, was home with grandma, Martin paused before sharing, “And by the way, I have to announce that we are pregnant. We are waiting!”

With a sheepish grin, the ‘Come With Me’ singer added, “I love big families.’

As actress Ana Ortiz presented Martin with the 2019 Visibility Award, she noted “his bold voice that changes the world.”

That was referencing, in part, Martin’s pilgrimage to Puerto Rico earlier this year during great political upheaval. Standing with protestors for days, Martin led the charge demanding the resignation of Gov. Ricardo Rosello Nevares.

After a week of unprecedented protests, Rosello resigned.

Accepting the honor, Martin dedicated the honor to “the refugees, to members of the LGBT community that are…leaving their countries because they feel threatened.”

“This award is for [the asylum seekers],” he continued. “I will make sure that I lend my voice for them: Ladies and gentlemen, the only thing I’m asking for is to go out and vote.”

“This award is for [the asylum seekers]. I will make sure that I lend my voice for them: Ladies and gentlemen, the only thing I’m asking for is to go out and vote.” – @ricky_martin #HRCNationalDinner #WeAreHRC

Fatherhood has been very good to the Latin heartthrob as a visit to his social media constantly reveals.