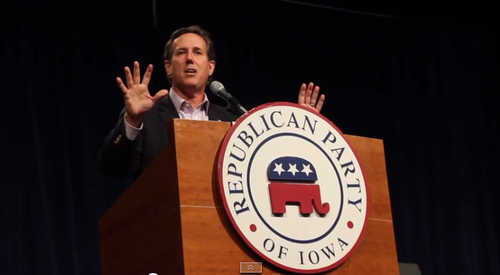 At a GOP convention in Iowa over the weekend, Rick Santorum’s interesting choice of words were again on full display:

“Look, I understand why campaigns and all of you want to go out and just bang the president. It’s fun. I mean, it’s fun. It’s easy. It’s getting easier every day…”

You’ll note that Santorum says the President is a failure on every front. Tell that to the men and women of our armed forces who have come home from two wars; tell that to the retirees whose pensions have grown in value as the stock market has doubled; and tell that to the thousands and thousands of married same-sex couples who now have the rights and recognition of marriage.