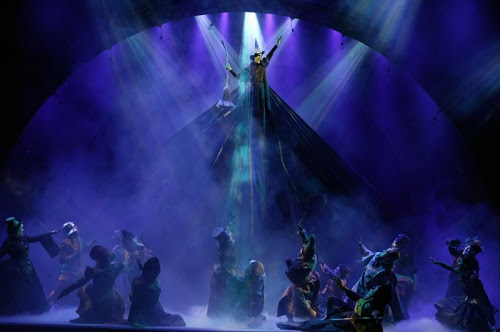 The Smith Center has hit another home run with the 6 week run of the national touring company of WICKED, now through October 7.

This production offers first class talent and extraordinary production values that make for a roller coaster ride of an evening in the theater. From laughs to touching moments of unlikely friendship to the soaring anthem of newly discovered inner courage – WICKED delivers.

The musical is based on the 1995 novel “Wicked: The Life and Times of the Wicked Witch of the West” by Gregory Maguire, a book that cleverly imagines the back story leading up to a tornado that sends Dorothy on a trip from Kansas to Oz. During this election year, it is timely in that it is filled with truths about the nature of political power and mass manipulation.

Nicole Parker hits a home run as “Elphaba” — the Wicked Witch of the West. Having played the role on Broadway, Parker’s experience shows in her soaring vocals which makes the Stephen Schwartz score sound almost easy to sing (it’s not.) Her first big song – “Wizard and I” – immediately lets the audience know that the difficult vocals will be no problem for Parker. And her Act One roof raiser – “Defying Gravity” – is top-notch. Plus she is very comfortable with playing not only the dark side of the role but the humorous moments, too.

Patti Murin’s “Glinda, the good witch” brings a lot of lightness and pop to the evening. She starts out the evening with an approach that is less showy than I’ve seen, but grows considerably by Act Two.

Also strong were Tom McGowan as the “Wonderful Wizard of Oz”, and Demaree Hill as the Wicked Witch’s sister “Nessarose,” whose big scene in the second act was one of the best performances of the role I’ve seen.

My one small reservation was that there were moments when the performances by the ensemble cast felt a bit phoned in, as if they’ve been doing this for a quite a while. Physical energy was dropped while exiting, and some choreography wasn’t as clean as it could have been.

With vividly imaginative scenic designs by Eugene Lee, Susan Hilferty’s quirky costumes that blend high style and fantasy and gorgeous lighting by Kenneth Posner, the show is fantastic to look at. Supporting all the terrific stage architecture on display is a powerful story of peer pressure, prejudice and even hints of racism in an immediately recognizable story. Joe Mantello’s resourceful and inventive direction brings the evening to life in a manner that still feels fresh. And Wayne Cilento adds creative and stylish musical staging to the production.

The audience at the performance I attended was clearly spellbound, and there was an instant standing ovation at the beginning of the bows. The magic had been made.

Where: Reynolds Hall, the Smith Center for the Performing Arts, 361 Symphony Park Ave.