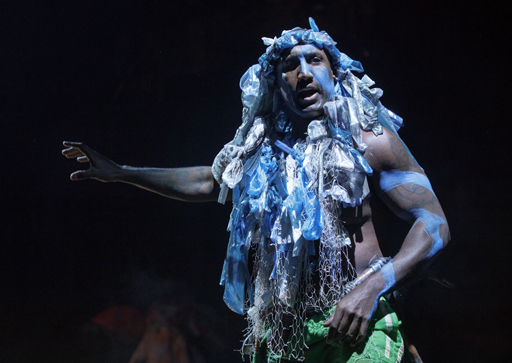 I didn’t realize it had been a nearly a year since I’d visited New York City until I planned a recent trip back east.

My bestie for life, Carlye, was being installed as the new Episcopal Bishop for the Diocese of Newark. So I made sure I built in a day to catch up on some Broadway 🙂

It took me a year to get to Circle in the Square on Broadway to see the Tony Award winning revival of Once On This Island, but it was definitely worth the wait.

It would be easy to run out of superlatives that describe this gorgeous, delightful and supremely creative masterpiece running strong nearly a year after opening on Broadway.

But it’s also just as easy to pick one word to describe this theatrical experience: Joy.

In a world that seems turned upside-down at times, director Michael Arden’s grounded new staging of this musical fable about a boy and girl named Daniel and Ti Moune set in the French Antilles is a testament to the belief that that which lifts us up can conquer darkness.

In that this is theater-in-the-round, the entire show is an environmental experience from the moment you enter the space.

The show begins with the citizens of this island intermittently entering the sandy beach to begin their day. Along the way, there’s trash to pick up (guess where the cast’s props come from?), greetings to make, and goats (live ones) to walk.

But then, a storm frightens a small girl and the denizens of the island take on different roles to tell the story of Ti Moune, sharing the lesson that love can “withstand the storm, and cross the earth, and survive, even in the face of death.”

The winning score by musical theater veterans Lynn Ahrens and Stephen Flaherty (Ragtime, Anatasia) is easily one of the most melodic currently on Broadway. Kudos to music supervisor Chris Fenwick for the undeniably artful singing throughout the show. From lead vocals to the sung sounds of birds and frogs, this is high-end musicality.

And speaking of leads, the casting here is perfection as each actor steps forward to take their turn in the spotlight.

From Alex Newell’s “Asaka – goddess of the earth,” who brings down the house with an exuberant and effervescent “Mama Will Provide;” to Quentin Earl Darrington’s “Agwe – god of the ocean,” who sets the stage for Ti Moune and Daniel to meet with vocal power that’s truly a force of nature (“Rain”); Darlesia Cearcy’s “Erzulie, goddess of love” is delicious bringing the two young lovers together in “Human Heart;” and American Idol alum Tamyra Gray is stunning as “Papa Ge, god of death.”

The beauty here is that once the story begins, the commitment to storytelling is such that we don’t think about gender, just the tale being told – to spectacular effect.

Their goodbye to Ti Moune as she leaves them to journey to her destiny is a heartfelt, emotional highpoint.

Other intimate moments, like the lilting “Some Girls,” sung with charming warmth by “Daniel” (Isaac Powell), allows romantic respite from larger numbers.

And then there’s the fire and grace of Hailey Kilgore, whose Broadway debut as Ti Moune was fittingly honored with a Tony Award nomination for “Best Actress in a Leading Role” and a Theatre World Award.

Her vocal range and artistry, front and center in the joyful “Waiting for Life,” is only equaled by her earthy, ebullient passion on display in “Ti Moune’s Dance.”

And speaking of dance, choreographer Camille A. Brown (Drama Desk nomination) brings a physical vocabulary that provides a visual, human heartbeat throughout the evening in moments big and small.

You may remember the sexy, richly organic staging she brought to the Emmy Award-winning Jesus Christ Superstar Live! earlier this year on NBC.

This isn’t “TV dance competition high kicks and spins.” From storyteller to storyteller, every movement throughout the evening is borne out of characters living in the moment.

I’m not the only one who’s smitten. The critics fell over themselves when the production debuted:

“A big, bold, ravishing delight! After seeing this imaginative and dynamic musical, you may feel once is not enough!”– New York Times

“A place where magic is possible and beauty is apparent for all to see!” – The Huffington Post

Go see this gorgeous revival of Once On This Island at Circle in the Square on Broadway to feel your spirit refilled.

Once On This Island is intimate, romantic, inspiring, creative, uplifting.

Once On This Island is joy.