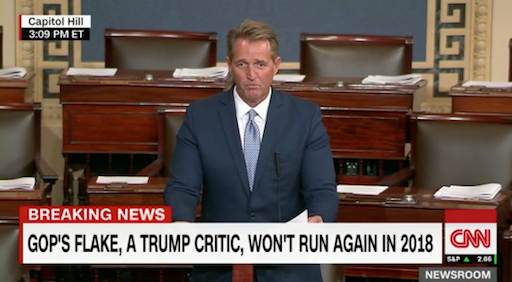 Sen. Jeff Flake, Republican senator from Arizona, just gave a breathtaking speech on the floor of the U.S. Senate announcing he will not seek re-election in 2018.

In doing so, he pointed to the “reckless, outrageous and undignified behavior” of Donald Trump as president.

Flake pretty much left it all out on the Senate floor as he called out the president as well as calling his fellow senators “complicit” in allowing Donald Trump to continue to debase the office of the presidency.

Read the full speech here, and watch excerpts below.

“I will not be complicit or silent.” Arizona Senator Jeff Flake says he won’t be running for reelection, after months of criticizing Trump. pic.twitter.com/KIDNMLYrV9

Thank you to my dear friend @JeffFlake for your honorable service to the state of #Arizona & the nation.

Jeff Flake’s speech on the Senate floor will end up in the history books.